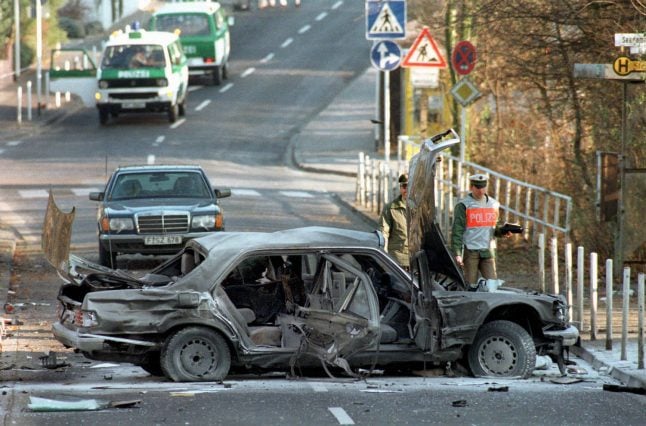 The aftermath of an RAF attack in 1989. Photo: DPA

The German autumn began 40 years ago on Tuesday, when Red Army Faction (RAF) terrorists kidnapped Schleyer, who was president of the German Association of Employers and a former SS officer.

The violence stepped up a notch when, on October 13th, Palestinian terrorists hijacked the Landshut, a Lufthansa plane carrying 86 passengers. Their demands were the release of 10 leading RAF figures who were in a jail in Stuttgart.

But when West German special forces stormed the Landshut in Mogadishu on October 18th, freeing all the passengers, the terrorists had few cards left in their hands.

On the same day the jailed leadership of the RAF, including the group’s founders Andreas Baader and Gudrun Ensslin, committed suicide. A day later Scheleyer’s body was found in the trunk of a green Audi 100 in France.

With that the German Autumn was over, and the most deadly terror group in post-war Germany had passed its peak. But who were the RAF?

1. RAF ties with the Stasi

At the end of the Cold War, hundreds of thousands of previously secret documents were uncovered detailing the operations of the Stasi, the East German secret police. Among these was information which showed how the Stasi had worked with the RAF over a period in the late 1970s and early 1980s.

The uncovered documents implied that the Stasi allowed RAF members to live in East Germany when they wanted to leave the group, providing them with new identities. There is also evidence that they trained them in the use of anti-tank missiles at the time of a failed assassination attempt on US army general Frederick Kroesen in 1981. Kroesen's car was attacked with a rocket propelled grenade, but he survived.

The relationship was however characterized by mistrust on both sides, as the East Germans were terrified that the cooperation would come to light, while the RAF were reluctant to reveal too much about their plans, according to Focus magazine.

On May 14th 1970, Meinhof freed Baader from police captivity under the guise of interviewing him for a book. It came to be the day the RAF would refer to as its point of birth.

Along with a group of radicals, Baader, Meinhof and other key members of the RAF almost immediately travelled to Jordan, where they received weapons training from the al-Fatah militant group. Shortly after his return to Germany, Baader was suspected of involvement in a series of bombings that led to fourth deaths and 70 injuries.

In May 1972, the RAF reportedly came to an agreement with Palestinian organizations to support one another. When the Palestinian terror group Black September took Israeli Olympians hostage in Munich in 1972, they demanded that Baader and Meinhof be released from German prison after their capture earlier that year.

The ties were again evidenced in the People’s Front for the Liberation of Palestine (PFLP) hijacking of the Lufthansa Flight 181 in 1977 and demanded the release of 11 imprisoned RAF terrorists.

3. A leader of the group later became a neo-Nazi

Horst Mahler trained as a lawyer after the war, and joined the SPD in Germany in the 1950s. However during the 1960s, Mahler became far more radical, and became involved in far-left protesting and activism. He then defended a few far-left activists in court, including Baader, and Rudi Dutschke, a prominent spokesman for the student-left who survived an assassination attempt in the 1960s.

Following Baader’s imprisonment, Mahler helped organize his escape with Meinhof in 1970, and then fled to Jordan with the pair. He was later involved in an armed bank robbery and was arrested in autumn 1970 and sentenced to 14 years in prison.

In 2000, he applied for membership of the neo-Nazi party the NPD in Germany, and was then sentenced to six years in prison in 2009 for incitement of hate crimes and Holocaust denial.

The RAF have themselves been accused of anti-Semitism for their hostile attitude towards Israel.

The RAF normally named their commando groups or operations after members of the group who had already died. The assassination of Federal Prosecutor Siegfried Buback in 1977 was named after Meinhof, who died a year earlier in 1976.

Naming operations after ex-members was a way of immortalizing them, while justifying the acts of murder through the casualties that the group had already suffered, according to the Federal Agency for Civic Education. After several high-profile attacks,  Baader and Meinhof were arrested along with two other leaders – Gudrun Ensslin and Jan-Carl Raspe – and sent to Stammheim maximum security prison in Stuttgart. The trial started in 1975, but to avoid escapes, the German authorities built a specialized courtroom on the premises of the prison.

After Baader's escape from captivity in 1970, the authorities weren’t going to make the same mistake twice.

The courtroom was built within the prison grounds so that there was no chance of the terrorists escaping whilst being transported to and from the trial. It was made of steel and concrete, and had no windows.

At night, it was covered by floodlights, and was at all times guarded by special forces on the roof, and hundreds of police on the ground. Police were also backed up by specialist commandos from the GSG-9, as well as two helicopters patrolling the grounds.

6. Jean-Paul Sartre was a sympathizer

Although the RAF was widely feared in Germany, they could at least count the well-known French philosopher Jean-Paul Sartre as one of their sympathizers. Sartre had said about the group that they were an “interesting force”, and had “a sense for the revolution.”

Ulrike Meinhof suggested that Satre might want to speak to Baader, and so a meeting at Stammheim prison was arranged in 1974. The meeting was supervised by guards and a law enforcement officer, and Sartre even started by saying he’d come “as a sympathizer.”

Satre’s meeting and perceived support was heavily criticized, although it was later reported that he had called Baader an “asshole.”

One of the main motivations for the RAF’s formation was as a protest to the Vietnam War. However they weren’t the only group in Europe committing acts of terror in response to the war.

In 1967, the L’Innovation department store in Brussels was showing an exhibit of American merchandise, which had drawn heavy criticism. On May 22nd, the store was engulfed in flames, and burned down, killing over 250 people. Although the official cause is not known, it is thought to have been started by a communist group protesting the war in Vietnam.

This inspired many in Germany, and even led to some far-left groups in Germany, of which many RAF activists were members, to distribute leaflets saying: “When will the department stores in Berlin burn?”

Baader and Ensslin decided to turn words into actions and burned down a department store in Frankfurt in 1968. Although no one was hurt in the blaze, it casued half a million Deutsch Marks worth of damage. The pair were arrested and charged to three years in jail.

8. Some of the terrorists were never found

Official histories of the RAF divide them up into three generations. The first under Baader, Meinhof and Ensslin carried out a series of robberies and attacks between 1970 and their arrest in 1972.

A second generation emerged and engaged in more extreme tactics aimed at freeing the captive leaders from the first generation, including an attack on the German embassy in Stockholm.

A third generation re-concentrated their efforts on an anti-capitalist struggle, attacking Nato and US military bases in the mid-1980s. The last victim of the group was Detlev Rohwedder, a government official shot dead in 1991.

After the RAF announced its dissolution in 1998, the remaining members stayed in hiding. A year later, one was killed and one was captured in a shootout with Austrian police in 1999.

But authorities have still never found four of the terrorists. Friederike Krabbe, from the second generation, has been on the run since the 1970s with her last probable address Baghdad.

In 2016, German prosecutors said that a number of robberies on banks and supermarkets were being linked to three remaining RAF members still at large.

Authorities believe that the list of crimes carried out by the three suspects – Ernst-Volker Staub, 62, Burkhard Garweg, 48 and Daniela Klette, 58 – is far longer than earlier thought, dating back five years to 2011, after their most recent suspected bank robbery in 2016.

“In the attacks, they use pistols and sometimes electric stun guns to threaten supermarket staff or cash carriers either as they enter or leave the cash offices,” said prosecutors.

“The behaviour of the culprits is calm, polite and sober,” the prosecutors noted, adding that the suspects sometimes also stress that they “are only after the money”.

RAF expert Klaus Pflieger insists, however, that these robberies are not meant as acts of terror, but are just ways that the former terrorists are able to survive in the underground.

On the morning of October 27th 1977, guards discovered the body of Jan-Carl Raspe lying in his cell with a gunshot wound to his head. He would later die of his injuries in hospital. They then discovered the body of Andreas Baader with a gun lying by his side, with which he had shot himself in the head. Then Gudrun Ensslin was found dead, having hanged herself by a cable in her cell. A fourth RAF member, Irmgard Möller, was found with four stab wounds in the chest, but she would survive her injuries.

In a press conference, prison authorities said that the three had committed suicide together in a pact.

Möller stoked conspiracy theories by claiming later that there was never a suicide pact and that her accomplices had in fact been murdered by German secret agents.

Questions were asked about how the guns were smuggled into the cells in the high-security prisons, and up until 1990, left-wing activists marched on the streets of Berlin demanding clarity on the deaths.

But other members of the RAF told authorities that they had helped smuggle the pistols into the cells. Meanwhile, a major hole in the conspiracy is the fact that Möller survived the alleged murder. Critics point out that it would not make sense for the secret services to have allowed her to live to tell the tale.