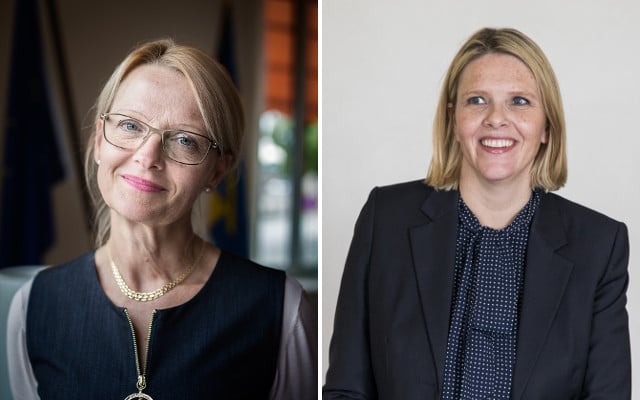 Norway’s Migration and Integration Minister and nationalist Progress Party MP Sylvi Listhaug came to Sweden on Tuesday for a visit she said is designed to provide insight into work on integration in socio-economically challenged areas.

Among her scheduled activities were a meeting with Swedish national police chief Dan Eliasson and a trip to Stockholm suburb Rinkeby. The Norwegian was informed at the last minute however that a previously planned meeting with Sweden's Migration Minister Heléne Fritzon had been cancelled.

Fritzon explained to Norwegian newspaper Verdens Gang (VG) that in recent days it became clear to her that the visit was actually part of Listhaug's campaign for the September 11th general election, and involved spreading an “inaccurate image of Sweden”.

“That becomes clear for example in today's interview with VG, where she claims among other things that there are 60 'no-go zones' in Sweden, which is complete nonsense. I will gladly meet my Norwegian colleagues after the election, but I don't want to be a part of that campaign,” Fritzon wrote to VG.

READ ALSO: The Local's guide to the Norwegian election

In the VG interview the Swedish minister referenced, Listhaug claimed that “parallel societies have developed in more than 60 places in Sweden”, calling them “no-go zones” and insisting that there are “conditions of lawlessness and criminals in control” in places with “a large quantity of people with immigrant backgrounds”.

In a further twist, Swedish newspaper Aftonbladet reports that the Norwegian government warned their Swedish counterparts about the meeting, citing anonymous sources within Sweden's Foreign Ministry.

“They made contact and warned that this visit maybe had a misleading purpose and apologized in advance,” the source is quoted as saying, adding that it had been made clear that the visit was not backed by the entirety of Norway's government, a coalition between the Progress Party and Conservative Party.

“Listhaug must make sure that what she says is in accordance with how local authorities have evaluated the situation”.

READ ALSO: What you need to know about no-go zones and Sweden

Swedish police and emergency services have repeatedly rejected the term “no-go zones”, which caught on internationally after a columnist used it. The authorities argue that if anything, they have a greater presence in places judged to be vulnerable.

“We don't have any no-go zones absolutely not, the opposite in fact. We move around in all areas with the same force, at the same speed. But sometimes we get indications, or see, that something is not right and we then take precautions,” a fire chief in an area covering some of northern Stockholm's most vulnerably suburbs told The Local earlier this year.

Listhaug has in the past used Sweden as a cautionary tale while calling for tighter immigration policies in Norway.