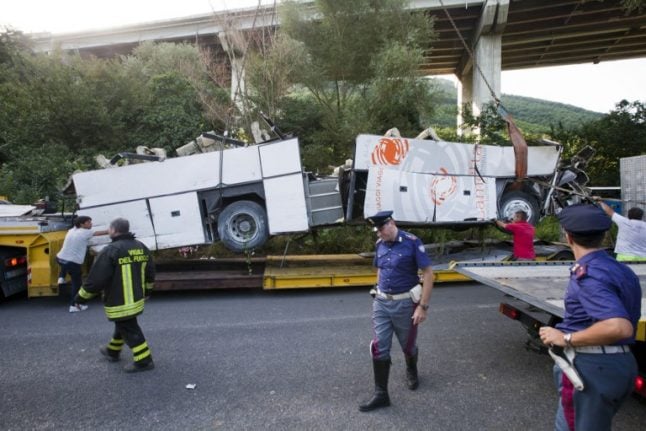 
A tourist bus carrying mainly French and British nationals collided with the top of an underpass at a railway crossing in Rome on Sunday.

At least 18 people were injured on the bus which was carrying many children. At least one child is in a critical condition, reports Repubblica, while five more people were hospitalized.

The top of the bus was torn off after the driver failed to see a notice that prohibited buses taller than 2m 40cm from traversing the underpass on the Roma-Lido railway, the report said.

According to national press agency Ansa, the accident occurred on the corners of Via di Malafede and Via Ostiense at around noon on Sunday, August 13th.

The bus was carrying holidaymakers mainly from France and the UK staying at a nearby camping site, Corriere della Sera reports.

The driver was not under the influence of alcohol, the report said.

Further south off the coast of Naples, between the islands of Ischia and Procida, a diving instructor and a 13-year old girl died during a diving exercise on Sunday. The body of diving instructor Antonio Emanato, 42, has been recovered.

The girl's body is believed to be trapped in a cave 12 meters under water. Divers from Italy's fire department are mounting an operation today to recover the body, according to Repubblica.

It is the second tragic accident in the waters off the archipelago in a week. Alessia Piatti, 18, drowned off Ischia last week. Repubblica says the recent extreme weather conditions have affected the tides off the islands.