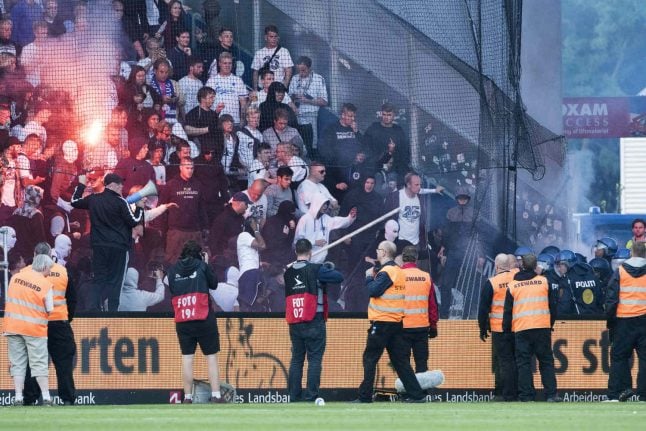 FCK expects over 100 people to be banned from all of the club’s home and away matches as a result of last Sunday’s violent scenes at Brøndby Stadium.

“This is a very, very serious issue for everyone at FC Copenhagen. That’s why it’s crucial we act quickly, but also thoroughly and efficiently to find those responsible. They must be punished by us, and also by the police wherever relevant,” club director Anders Hørsholt said in a press statement.

“Furthermore, information on all persons who breached stadium rules at Brøndby Stadium will be passed on to Brøndby, who will issue fines according to their stadium rules,” Hørsholt added.

The violent scenes occurred in the FCK section of Brøndby Stadium after the home team scored to take a 1-0 lead in the closing stages of the match, which they won by the same score.

Some of the hooligans wore masks and attacked security personnel, after which riot police were called, reports broadcaster DR.

The end of the match was delayed by 20 minutes as a result of the scenes.

Club director Hørsholt said an ID-linked ticket system called awaykort was to thank for the easy identification of the culprits.

“If you want to legally enter our away sections, you must be registered with your name and photo. So we know exactly who was in the away section on Sunday, with the exception of those who broke through security checks,” he told DR.

“We will not accept persons wearing masks, either in away ends or at [home ground] Telia Parken, so we are increasing our focus on and punishments for this. We have made that unequivocally clear to our entire fan base in the last few days, so we are sure that we have got the message across,” he said.

Extra security staff will also be placed in FCK away sections at future matches, reports DR.