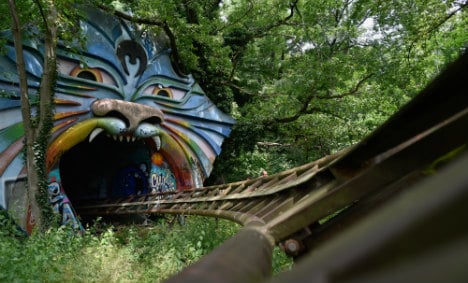 “It's amazing, I've never seen so many people,” said 'Urbex' veteran Ciaran Fahey during a visit to an overgrown and graffiti-covered former children's hospital in what was once communist East Berlin.

Abandoned in 1991, it is nicknamed the “zombie hospital” after one of the hundreds of murals on its cob-webbed corridors and dank former patient wards, now occasionally used by partying youths and homeless people.

Like other “lost places”, it is potentially dangerous and officially off limits, meaning visitors trespass as they enter through a hole in the chain link fence while they keep a nervous eye out for authorities.

Berlin city official Eva Henkel said police take a dim view of such urban adventures, that visitors enter illegally and at their own risk.

“If you have any brains at all, you don't go in there,” she said.

To Urbexers, this is as enticing as a holiday brochure, and the hospital is firmly on their Berlin sightseeing map.

Fahey, an Irish-born longtime Berlin resident, knows such lost places better than most, having lovingly photographed and described them in his blog and photo book, both called “Abandoned Berlin”.

The trend took off after the 1989 fall of the Berlin Wall opened up a vast hinterland, replete with former Nazi bunkers, Soviet army barracks, shuttered red-brick factories and even an old fun-fair with rides and replica dinosaurs.

As the East German economy collapsed and the country reunified, these places were left to the ravages of weather and time.

Over a quarter-century on, as a property boom has remade the face of the city, the Urbex fashion has caught fire, with ever more explorers searching out ever fewer abandoned places.

The movement is global, with hotspots from Melbourne to Detroit, and sometimes dubbed “roof-and-tunnel hacking”. A Google search for “urbex” nets more than seven million hits.

“Interest has exploded in recent years, it is becoming more and more popular,” said Fahey.

To many the nerve-tingling trips have a flavour of post-apocalyptic tourism. Max said it was fascinating to witness “how nature has taken over”.

Where there is a trend, private business is quick to follow, and several Berlin operators now offer tours for paying guests.

One takes the curious up a wooded hill in the former West Berlin, to a graffiti-covered Cold War-era listening post of the US National Security Agency (NSA).

For years, rave parties were held under its tattered geodesic domes, which loom like giant golf balls atop Teufelsberg (Devil's Hill), a mound made of World War II rubble.

Such tours offer “authorised and secure” access and allow everyone “to feel the fascination of these places”, said Andreas Boettger, co-founder of operator Go2know.

As early Urbex pioneers, he said the company could understand that purists object to such for-profit tours.

But he said these also helped preserve old sites, “an ideology shared by many hobby photographers, history buffs and other interested people”.

Fahey said commercial visits are “not something I like… People are bringing people to places that they can see for themselves for free. But if people want to pay tour companies, it's up to them.”

The veteran has himself drawn fire from the community for what some consider a no-no – describing in detail how to get to, and around, the hidden marvels he has discovered.

“I publish the addresses, it's controversial,” he admitted. “Some people want to 'keep the secret'.”

“But these places have a very short life expectancy… I think they should be open to everyone.”

PARTNER CONTENT
Where are you going this summer? Why Malta is the perfect Mediterranean escape