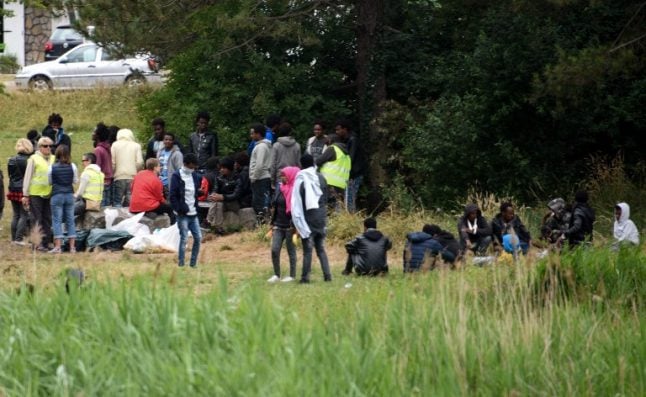 A photo from earlier this month shows migrants waiting on a field near the port of Calais, northern France. The UK remains the ideal destination for hundreds of refugees. PHOTO: DENIS CHARLET / AFP
Pilot David Green, 54, and his accomplice Edward Buckley, 46, admitted having made several flights from Marck aerodrome, near the northern port of Calais, charging passengers £10,000 (€11,120) each.
Calais is a springboard for migrants attempting to cross the Channel to Britain, normally by stowing away on trucks that board ferries.
The local prosecutor's office told AFP it was the first time it had handled a case in which illegal migrants were flown out of the country in a private aircraft.
The defendants' fast-track trial took place just days after their arrest on Monday. They admitted having made five trips since April, each time carrying between two and four passengers on their light aircraft, normally used for tourism.
The two men, convicted of helping foreigners travel illegally, had their plane confiscated and were also banned from French territory for five years.
They were sentenced to 30 months behind bars.
Prosecutor Raphaelle Wach said the pair had been motivated by the money and said it was unacceptable that they had profited from people's misfortune in this way.
But Buckley's lawyer Emmanuelle Osmont argued that this was not a case of exploiting people's misery. The migrants in this case had chosen to make the crossing by plane and had the money to pay for the journey, she argued.
Green was arrested on Monday at Marck aerodrome as he was about to take off with four Albanian passengers, one of them a three-year-old child.
His accomplice Buckley was arrested near the aerodrome with his wife, who police established was not involved in the operation.