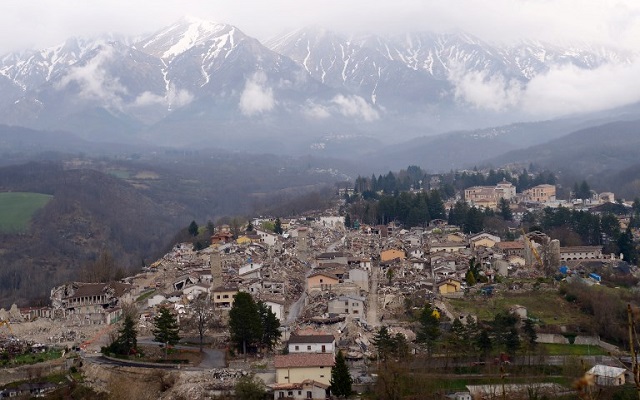 Prosecutors in Rieti, Lazio have placed five people under investigation, almost a year after the 6.0 magnitude quake devastated Amatrice on August 24th, 2016. These are the first charges to be brought since the disaster.

The probe relates to the collapse of a public housing building in Piazza Augusto Sagnotti, where 19 people aged between 12 and 81 died.

In total, 299 people died in that quake, the majority of them (238) in Amatrice, which was almost completely destroyed. A series of further major quakes caused more damage in the region in October.

Two directors of the construction firm which built the apartment blocks are under investigation, along with one public housing worker, a civil engineer, and a former city councillor.

According to prosecutors, the blocks were not built to safety standards, due to incorrect calculations and poor quality materials. The five suspects are accused of manslaughter for their roles in building the apartments and providing certificates affirming its fitness for use.

“The buildings were built very badly, and this isn't the case for other buildings put up in the same square by the same company,” chief prosecutor Giuseppe Saieva told news programme Tg1. “It was about savings; a problem of costs and profit. The fact that this was a building built by the State saddens us – we need to do more.”

“We're trying to give answers to those who are waiting for them, and there are still dozens of other investigations to conclude,” said Saieva.

Directly after the quake, Amatrice's mayor said: “Three quarters of the town just isn't there any more.”

Drone footage shows the town covered in snow in January.

Since the original disaster, aftershocks and new tremors have destroyed the town's weakened buildings, with its iconic church and bell tower falling in January this year.

Concern was raised over buildings which collapsed despite supposedly being renovated to quake-proof norms. Amatrice's Romolo Capranica school was one of the recently renovated buildings which failed to survive the tremors.

Earlier in 2016, four technicians were handed culpable homicide sentences by Italy's top court, which judged them partially responsible for the deaths of eight students who died when their university residence collapsed during the 2009 L'Aquila quake.

READ ALSO: How Italy plans to rebuild its earthquake-damaged towns

“These 58 pieces represent thousands of years of rich history, yet traffickers throughout Italy utilized looters to steal these items and to line their own pockets,” said Manhattan District Attorney Alvin Bragg, noting that it was the third such repatriation in nine months.

“For far too long, they have sat in museums, homes, and galleries that had no rightful claim to their ownership,” he said at a ceremony attended by Italian diplomats and law enforcement officials.

The stolen items had been sold to Michael Steinhardt, one of the world’s leading collectors of ancient art, the DA’s office said, adding that he had been slapped with a “first-of-its-kind lifetime ban on acquiring antiquities.”

Among the recovered treasures, which in some cases were sold to “unwitting collectors and museums,” were a marble head of the Greek goddess Athena from 200 B.C.E. and a drinking cup dating back to 470 B.C.E, officials said.

The pieces were stolen at the behest of four men who “all led highly lucrative criminal enterprises – often in competition with one another – where they would use local looters to raid archaeological sites throughout Italy, many of which were insufficiently guarded,” the DA’s office said.

One of them, Pasquale Camera, was “a regional crime boss who organized thefts from museums and churches as early as the 1960s. He then began purchasing stolen artifacts from local looters and sold them to antiquities dealers,” it added.

It said that this year alone, the DA’s office has “returned nearly 300 antiquities valued at over $66 million to 12 countries.”