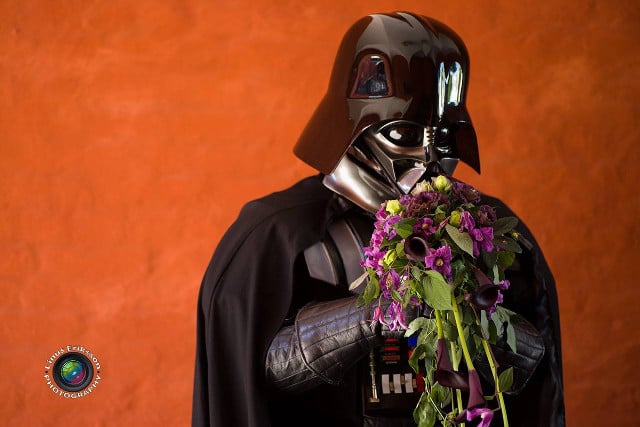 Having a Star Wars themed wedding is something most super fans of the movie series will have threatened their partner with at least once, but two Swedish diehards actually made that dream a reality, and the results are pretty spectacular.

Jenny Björk and Tommi Tulkki tied the knot in Halmstad, southern Sweden, last weekend while flanked by some unusual guests: Stormtroopers, Imperial Guards and Darth Vader to name a few. The bride and groom were dressed as Mara Jade and Luke Skywalker respectively… and R2-D2 was the best man, naturally.

“The idea actually came from both of us. We both love Star Wars equally, so it was a given that the wedding would be something to do with Star Wars,” Björk told The Local. Fortunately, convincing friends to take part wasn't difficult, as most of them are also Star Wars obsessives.

“Both me and my husband are in Star Wars organizations which exist all over the world. The large association which I'm a part of is the 501st Legion from the USA, and there's a branch here in the Nordic region called the Nordic Garrison. Almost all my friends are in the Nordic Garrison, so it was them who came came along dressed up as Stormtroopers, Darth Vader etc.”

If you think the costumes look exceptional then that's because they are: all of them are “screen accurate” portrayals of the originals from the films, a requirement from the association the couple and their friends are part of.

Guests travelled from a galaxy far, far away to make the wedding… Photo: Linus Eriksson.

Looking to the future, the newlyweds will take their honeymoon at one of the filming locations from the movies, while later in the year comes an important moment for any Star Wars fan: the release of next movie 'The Last Jedi'. There are a couple of things Björk hopes to see from the new film, and considering the costumes the couple wore at their wedding, they aren't a surprise.

“I hope to see more of Luke Skywalker of course, I like that character a lot. And also the character I usually dress as, Mara Jade, who is in the books. That said I’m a bit unsure – you have an image of her and don't want to ruin it, but at the same time it would be fun for her to be in it so the character can become a proper part of the canon, which she isn't just now.”

With that, we may have lost the non Star Wars fans, but the real geeks will likely be nodding silently in agreement. Han shot first.