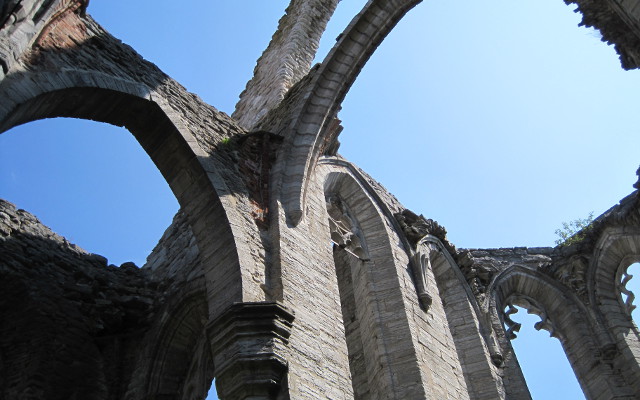 Eva Sjöstrand greets me with enthusiasm as I knock on her door. The writer and radio producer has had a busy season with the release of the English version of her book Angels & Dragons – Gotland's Cultural Treasures. The book captures stories of each of the 98 medieval churches on the island of Gotland, the oldest dating back to the 11th century.

I admire the magnificent view of the blue sea from her balcony while Eva steeps some tea. Then we settle down for the interview.

Your book Angels and Dragons is originally in Swedish. What inspired you to publish an English version of the book?

There is a huge interest among the international audience towards Gotland's churches, because they are so unique, they are so old and they have a lot of art inside them. When we published the book in Swedish, we thought, why not in English?

How did the idea come about?

The project idea came from [co-author] Christer Jonson, who is the number one among book designers in Sweden and is 80 years old now. He had been taking pictures of Gotland's churches. He was inspired when he visited Barcelona and saw the Catalan museum of art (MNAC). He thought, “Well, we have this at home too”.

When he came back, he called me and said, “Eva, I am going to do a project on Gotland’s churches before I die. Are you on that trip?” And I said yes! Of course then I didn't realize how much work it was but I didn't mind. Looking back these have been fantastic years and the trip is still on, with the book now translated in English. We have had fantastic help from the translator Kathy Gow Sjöblom. She is an Englishwoman who has been living here on Gotland for 37 years. She is a guide and a teacher and she is very interested in these churches. What was the process of collecting information and researching the book like?

I started with going around and visiting all the 98 medieval churches on this tiny island. The process also involved a lot of reading, as there have been a lot of art historians who have recorded and written about these churches. But I think they missed one thing, the stories of the people. You can read those books in Swedish, but it has a lot of art terminology which is really difficult for normal people to understand. So I tried to find out at least one or a few persons in every church.

The book mentions some dramatic stories behind the churches. I read one about Alva Church and its vicar Lars Malmsten, whose wig caught fire in the middle of a service after lightning struck. How did you find those stories?

Well, nearly every parish on Gotland has their own parish book. I found this story in the parish book in Alva. While I read a lot of what art historians have written, I also researched stories shared among the people who are associated with these parishes. I interviewed a lot of people as well. Unfortunately there are not too many people alive who have memories of these stories.

For example I found something really amazing when I wrote about the Gammelgarn Church. In the 1950s when they restored the church, they thought of having the original column repaired, but realised it was in very bad shape because of a fire in the 15th century. Then they approached stone-makers in Slite in 1957 to make a replica. For the restoration, eight tall spruce trunks were used to support the church while the old column was removed and a new one assembled starting from the top. The column hung in the air till the final stone was place. And when they gently removed the spruce trunks the church did not shake at all, because the column was done to perfection. I chanced upon this story in an old book kept at Gammelgarn. When I told people about the column, the men from that parish who meet every Saturday at the sauna, were talking about nothing else but this story. Then suddenly one of the men remembered it. He was a child of 10 or 12 when this would have happened. His memory of the event had faded, until now. Then Christer also found pictures of the construction of the column and the spruce trunks.

There are so many stories like these that are fading away. So in many ways I have tried to clutch on to these stories before they disappear. In fact I have done that all my life as a journalist and author.

What was most compelling story you found among these 98 churches? Something that you couldn't stop thinking about?

There is the story from the Garde Church. An old book on Garde narrates how the 19th century sexton Hans Malmström, only received a pittance in pay, so he had to rely on others' charity. One of the farmhands at the rectory was from Sareemaa. When he died his corpse was stored in the ringing chamber. When Malmström came to ring the bell, he looked down into the coffin and said, “Here you lie, you old rogue, totally at rest when someone else has to do the pulling. Help me instead.” And so Malmström's last wish was fulfilled. The bell rang and rang. When people came running to see what was going on, they found him unconscious hanging on the bell robe. Still the bell rang on. The book also traces the changes in design. Which for you has been the most fascinating period in terms of craftsmanship?

I would think the early Romanesque churches, because they were so tiny and so simple, yet so beautiful. To me simple is beautiful. It is also impressive that these churches are so old and still standing. That led me to pose a question in the introduction – what are we building today on 100 places on this island which has this artistic quality, and will remain for a thousand years? And the answer is nothing. Not just Gotland, in Sweden we haven’t built something across 100 places that has this artistic quality.

When we talk about the legacy of today's generation compared to a thousand years ago, there is little to show compared to back then. Today there are some people I meet who think that the people then were so backward. But what are we? I think we are the backwards ones and not as smart as they were.

Isn't it the case that some of the churches still generate interest in how they were built with acoustics in mind?

Yes, absolutely. For example, in Lau Church, on the south east side of Gotland, echoes last 12 seconds. I have sung there in the past and participated in a special music project for Lau where the musicians were walking around while playing in the church. The acoustics are fantastic.

Would your book be of interest to a tourist looking to get to know Gotland's cultural treasures better?

I think so, because it is written for the people. It is easy to understand and relies a lot on pictures. Christer Jonson and Bengt Af Geijerstam have taken fantastic photos. But we did not want to make it a coffee table book because then it just lies on the coffee table. This has been made to a size that fits the glove compartment of your car. In fact there are a lot of people who carry the book in their car's glove compartment and refer to the book when they visit the churches in Gotland.

Your work involves a lot of creativity. What inspires you? Is it the place, the people, or perhaps both?

Of course the island itself, and I think there is a lot of stories around that are longing to be told. [There are stories] in the landscape and among people who have lived here through the centuries. As soon as you write or sing or talk about people it is interesting. People are peoples' joy as it is written in the old Icelandic (literary works) Edda.

I have written our own Gotland Edda, in which I try to combine the old sagas written on Iceland with the pictures on the Gotland picture stones, and what remains in our language, in our stories and the landscape.

Today you can travel all around the world, but there are no more undiscovered places (left). Yet history is full of them; forgotten treasures of lives, stories of a lot of women no one remembers, as if they have never lived.

Interview by Rupali Mehra, a senior journalist and news presenter from India. Rupali has worked with several Indian and international news organizations including Reuters. Currently she lives in Visby with her husband, a researcher on 'Future Urbanisms' at Uppsala University, Campus Gotland. She can be reached at [email protected]