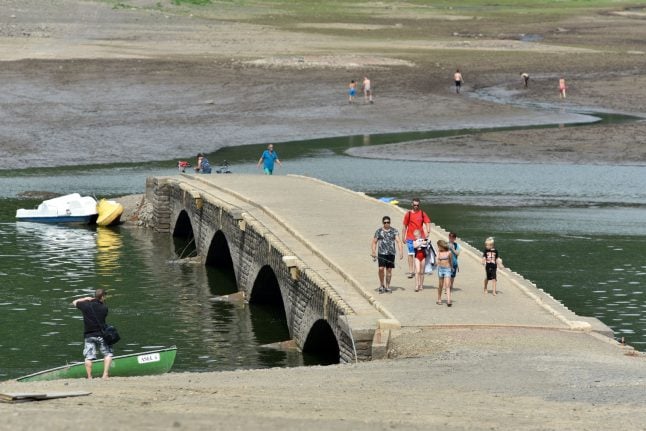 The bridge of Asel, emerging amid low water levels on Sunday. Photo: DPA

A lack of rain has caused the ruins of abandoned villages under Hesse’s Edersee lake to surface again, officials said on Monday, with the Federal Waterways and Shipping Administration observing that the water is currently at just 32 percent of its normal level.

“The lake is emptier than it has been in ages,” said Uwe Neuschäfer from an association that seeks to protect the former village of Berich – one of the villages hidden under the lake.

The ruins of Berich, as seen on Sunday. Photo: DPA

The three villages – Berich, Asel and Bringhausen – were abandoned when a dam was built between 1908 and 1914, flooding the area and creating the artificial lake.

Each time that the ruins become visible again, typically in the summer, the Edersee becomes a popular destination for visitors to catch a glimpse.

The ruins of Berich. Photo: DPA

One archaeological group, however, is hoping to make the ruins visible throughout the year, with plans to develop an app that allows smartphone users to view the ruins and learn more about them.

But this year’s lack of precipitation also produced something unusual: the ruins were visible in the winter at the start of the year, and with snow on top.