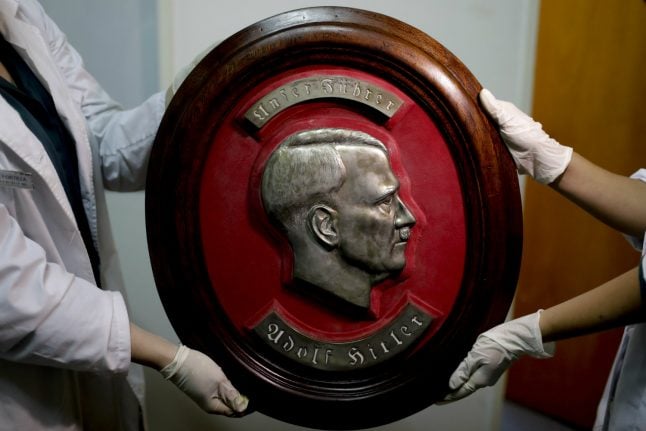 A relief of Adolf Hitler found in the collection. Photo: DPA

The Buenos Aires antiques dealer who was in possession of the Nazi relics told news agency DPA on Wednesday that most of the artefacts bore the stamp of the Solingen weapons manufacturer Carl Eickhorn, a company founded in 1865 that specializes in army knives. The company currently trades under the name Eickhorn Solingen.

Among the artefacts that bore the Carl Eickhorn stamp was an official Nazi eagle emblazoned with a swastika.

Around 75 Nazi objects, which Argentine officials say they believe to be genuine, were found in the private residence of the antiques dealer. Among them were pistols, busts of Adolf Hitler, swords and harmonicas. An hourglass found in the collection. Photo: DPA

The dealer denied having done anything illegal, adding that he had not attempted to sell the Nazi relics, but had them on display in a private room in his house.

Argentinian police have seized the antiques claiming that they were of “illegal origin.” A police source told the Associated Press that “they suspect they are originals that belonged to high-ranking Nazis in Germany during World War II.”

Several high-ranking Nazis, including Adolf Eichmann and Josef Mengele, fled to Argentina after the end of the Second World War.

But the Rheinische Post has a more mundane explanation for how the Nazi objects could have ended up in Argentina. The relatively large German community in the country during the 1930s was strongly pro-Nazi – around 10,000 Germans took to the streets of Buenos Aires to celebrate the Anschluss (joining) with Austria in 1938. The objects could have easily been shipped across the Atlantic by various Hitler supporters during the period before the German defeat in 1945.

The relics are set to be handed over to the Buenos Aires Holocaust Museum at the end of the investigation.