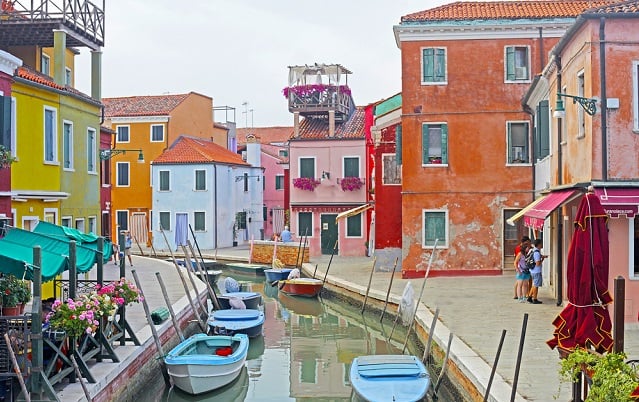 And Italian has an abundance of the confusing sayings. This means that you can understand every word that someone is saying to you, and yet still not have a clue what they're talking about.

In particular, the way different languages depict colour is a topic that has interested not just linguists, but natural historians over the years.

Some languages use different words to distinguish between distinct shades of blue, for example, while others have a single term for the colours English-speakers would categorize as blue and green. Researchers have debated whether this is because of a different perception of the colour spectrum, or if it's language which influences people's experience of the world.

Italian is generally considered a vivid and emotional language, with the hand gestures to match – and it's also very colourful. Some of the colour-based phrases are similar to English idioms: 'vedere tutto rosa' or 'to see everything in pink' means the same thing as 'to have rose-tinted glasses', while 'vedere rosso' can be translated literally as 'to see red' and 'la pecora nera' (black sheep) has the same meaning as in English.

Others are easy to guess, because they rely on the same associations with colours which many cultures share. So having 'una giornata nera' (a black day) means to have a bad day, and 'vedere tutto nero' (to see everything in black) is to be pessimistic,

Andare in bianco | To go white

This is a false friend, since in English someone who 'goes white' looks scared of something. In Italian however, it means to fail at something – usually a romantic endeavour. Similarly, the phrase 'un matrimonio bianco' should not be confused with the English phrase 'a white wedding', which refers mainly to the colour of the bride's dress. In Italian, a 'white marriage' means an unconsumated or sexless one, with the colour white acting as a symbol of virginity.

Mangiare in bianco | To eat in white

If you find yourself feeling under the weather in Italy, the chances are your Italian friends will urge you to 'eat in white', which means tucking into starchy foods such as pasta, bread and rice – but no sauces, herbs or colourful additions allowed. The idea is that such plain foods are easiest for the body to digest, meaning no aggravation to an upset stomach. Notte in bianco | A sleepless night

This expression is used to refer to a sleepless night, so you might think that 'bianco' is used as an opposite to 'nero' (black), meaning that the speaker didn't close their eyes. Actually, the expression derives from a medieval ceremony, when prospective knights had to undertake a solemn swearing-in.

Before the ceremony in which they were given their weapons, they were expected to spend an entire night fasting and praying in a chapel, in order to reflect on their new responsibilities. The knights wore white as a symbol of purity before taking on the new way of life. The term 'a white night' was first used to refer to a night without sleep by writer Italo Calvino in the 1950's.

A 'white fly' is a metaphor meaning that something is rare or unusual. It can be used in either a positive or negative sense – a misfit, or something that stands out.

While most phrases using 'bianco' seem to have a slight negative connotation, a 'settimana bianca' is far from dull. It's the usual Italian way of referring to a skiing or snowsports holiday, usually taken in the first few months of the year. Not to be confused with a Swedish expression sharing the same literal translation, 'en vit vecka', which means a week without any alcohol. Essere al verde | To be at the green

If someone says they're 'at the green', in Italian that means they're broke or out of money. This might be confusing, because like in English, Italians also say 'in rosso' (in the red) to refer to a negative bank balance. So why the difference?

'In rosso' is easily explained, because bank statements used to show negative numbers and outgoings in red, but there are several possible explanations for where 'essere al verde' comes from. It could be a reference to a medieval custom of making bankrupt people wear green caps as a sign of ridicule, or a nod to unlucky casino players who lost all their chips, leaving them only with the plain green table. Another theory goes that in Renaissance-era Florence, candles with a green bottom were used to time public auctions, so that when the time was up and all the money spent, you would be 'at the green'.

'Green' has connotations of freshness, so the 'green age' generally refers to youth. But be aware that it's sometimes used in an ironic or jokey way, so it's possible to say 'alla verde età di 90' for example, meaning 'at the ripe old age of 90'. This idiom has an interesting background. In 1936, a Royal Air Force squadron adopted three green rats as its emblem. Dictator Benito Mussolini bragged of the ability of Italian pilots, and the squadron took part in numerous bombing raids throughout the Second World War.

After that, ‘I'll make you see green rats' became a way to warn someone you were about to crush them with a humiliating defeat.

Children across Italy grow up hearing fairy tales of brave princesses and their 'principe azzurro' – Prince Charming, as they would be known in the Anglophone world. It's used to indicate a perfect man: good-looking, kind, and charming.

Blue eyes are relatively rare in Italy so may be seen as attractive, but that's not where the term comes from. According to Italy's language experts at the Accademia della Crusca, it could be because blue was traditionally the colour of the noble House of Savoy. 'Rosa' (pink) has connotations of positivity in Italian, but also of femininity or, sometimes, links to the LGBT community. A 'pink column' in a newspaper is a gossip column, reporting celebrity news seen as appealing to women in particular, while a 'romanzo rosa' (pink novel) is an Italian term for 'chick lit' or fiction aimed at women, usually with a romantic plot. On the other end of the colour spectrum, the 'cronaca nera' (black column) in the newspaper is where you'll find the latest crime news.

Want more facts and tips on the Italian language? Click here to read all our language articles.

Ever get the feeling that things aren’t quite right, that perhaps you’re missing something, that something fishy might be going on?

In Italian you can express that with the phrase qualcosa non torna (‘qual-KOH-zah-non-TORR-na’).

Qualcosa you’ll probably recognise as meaning ‘something’, and non of course here means ‘doesn’t’, so the slight wild card for anglophones is the verb torna.

That’s because tornare means ‘to return’ in most contexts – but it can also mean to balance, to add up.

Ho calcolato le spese, il conto torna.
I added up the costs, the bill checks out.

I conti dell’azienda tornano.
The company’s accounts add up.

The word can also refer more nebulously to something sounding or feeling right – or not.

Secondo me c’è qualche parte del mio discorso che ancora non torna.
I think there are parts of my speech that still aren’t quite right.

And when something doesn’t torna – that’s when you know things are off. It’s the kind of expression you’re likely to hear in detective shows or true crime podcasts.

Qualcosa non torna nel loro racconto.
Something about their story’s off.

It’s similar to how we can talk in English about someone’s account of an event not ‘squaring’ with the facts, and in fact you can also use that metaphor in Italian – qualcosa non quadra (‘qual-KOH-zah-non-QUAHD-ra’) – to mean the same thing as qualcosa non torna.

You can adjust either phrase slightly to say ‘things don’t add up’, in the plural: this time you’ll want le cose instead of qualcosa, and to conjugate the tornare or the quadrare in their plural forms.

Ci sono molte cose che non tornano in quest’affare.
There are a lot of things about this affair that don’t add up.

You can also add pronouns into the phrase to talk about something seeming off ‘to you’ or anyone else.

La sua storia ti torna?
Does his story add up to you?

C’è qualcosa in tutto questo che non mi torna.
There’s something about all this that doesn’t seem right to me.

The next time something strange is afoot, you’ll know just how to talk about it in Italian. Montalbano, move aside…