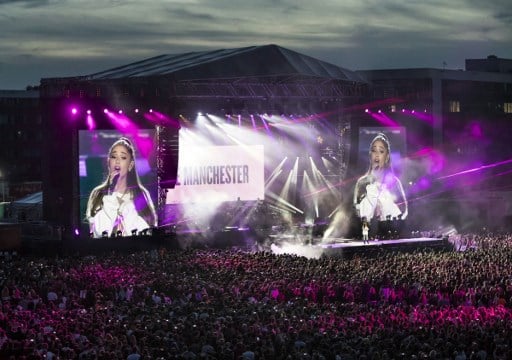 Grande performed on Sunday at the One Love Manchester benefit concert. Photo: Danny Lawson/Pool/AFP
The singer had been due to play at the Zurich stadium on Monday night as part of her world tour, but cancelled the concert after the horrific events of May 22nd, when a suicide bomber killed 22 people and injured many more at the end of Grande’s concert at Manchester Arena.
After a call-out on photo sharing platform Instagram, some 60 Grande fans who had been due to attend her Zurich gig gathered outside the Hallenstadion at around 3pm on Monday to pay their respects and show their support for the singer, reported news agencies.
Holding pink and white balloons – the colours of Grande’s tour artwork – they held a minute’s silence and then let the balloons go.

The fans also sang some of Grande’s songs and wrote messages paying homage to the victims.
Grande returned to Manchester on Sunday night for a benefit concert in aid of the victims of the attack.
The singer, who organized the One Love Manchester concert, appeared alongside acts including Coldplay, Justin Bieber, Katy Perry, Pharrell Williams, Take That, Robbie Williams and former Oasis frontman Liam Gallagher, himself from Manchester.
Grande will reprise the rest of her world tour starting in Paris on Wednesday.

Heartbroken & really Mad for the world we live in and for ALL the children that are raised in such an ugly place, which during our own childhood could still be called a happy place. ? Today I can't just post another “#instagram perfect picture” cause even though that's what all of us enjoy doing on a daily base, we ALL remain simple humans behind our smartphone screen, living in a real imperfect World not just Europe. ? Stay safe, keep spreading love and kindness and now more than ever, move your butt, stop caring what other people think, go realize your dreams and keep enjoying each second of your life to the absolute max. ?