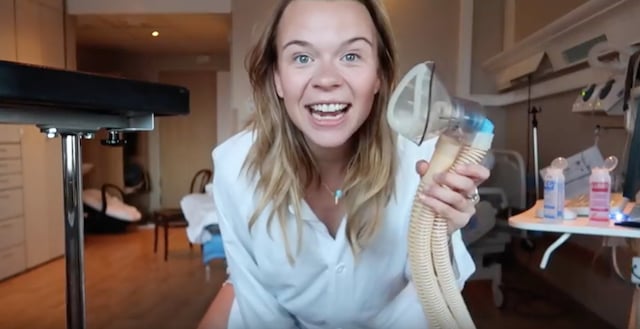 Credit: Margaux Dietz/YouTube screengrab
Not due to give birth for another two weeks, 26-year-old lifestyle blogger Margaux Dietz had popped out to run some errands. She had just left the post office after picking up a parcel containing a baby mattress and was walking along the pavement when her water broke.
“I was walking around with that big parcel, and bam! I could feel the water breaking. I walked into the nearest shop, which was a 7-Eleven. I called my boyfriend, and then thought: What do I do now? I'll get the camera out,” Dietz told The Local.
“There were two construction workers in there. They thought I was about to give birth on the spot! Guys don't really know how these things work.”

“Are you getting this? Me, running around here, in wet trousers!” Credit: Margaux Dietz/YouTube screengrab
Having called her boyfriend, the mother-to-be headed back home. In the video, she is seen darting down the street in soggy trousers, carrying the parcel with one hand, camera in the other.
You look so calm and happy running down the street! Were you never scared?
“I was just really, really excited! I've been looking forward to giving birth all my life. I didn't think it would hurt much – I just thought: Us women were made for delivering babies, it'll work out,” Dietz recalls.
READ ALSO: Sweden boosts maternity care in new budget proposal
Having blogged about her pregnancy for almost nine months, Dietz says the decision to film and publish the video of her giving birth came naturally.
“I'm very personal in my blog, and write about most things. I've been very open during my pregnancy, and many people asked me if I was going to film giving birth. And I told them maybe, because you never know what's going to happen,” she said.
“But I also decided to film it as I wanted to be able to watch it afterwards. Because people had told me the body has a way of making you forget about the pain, so that you'll want to go through it again.”
READ ALSO: Single women in Sweden told they can soon get free IVF

Margaux with her boyfriend, Jacob. Credit: Margaux Dietz/YouTube screengrab
Dietz decided against having an epidural, as she wanted to have the presence of mind to be able to speak to the viewers – and she asked one of the midwives to hold the camera.
“It was so cool. In spite of that pain, I was like: Make sure the camera is in focus!”
The YouTube video currently has 116,000 views, and the video on Instagram has been watched 44,100 times – and the reactions have been overwhelmingly positive.
“People really appreciate that I've shared so much of the positive experiences of giving birth. There have been so many negative reports in the media about maternal childbirth injuries, so people are happy to finally hear something positive,” Dietz said.

Margaux with her yet-unnamed baby. Credit: Margaux Dietz/YouTube screengrab
Throughout the video, the couple is heard referring to the baby boy as Pablo, but his actual name has still not been decided.
“Pablo is a 'working title,'” Dietz said, laughing. “We'll make a decision either today or tomorrow.”
READ ALSO: Funding boost won't save Swedish maternity ward which inspired 'car birth' course
Url copied to clipboard!