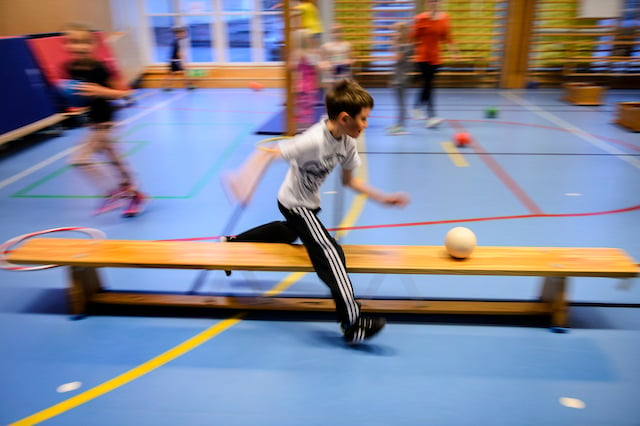 Photo: Anders Wiklund/TT
A majority in the Swedish parliament (Riksdag) previously urged the red-green government to increase the amount of physical education hours in primary school (for children aged up to 15) by 100. But the government rejected the Riksdag's demands, referring to the teacher shortage: Sweden is currently lacking 200 certified PE teachers.
READ ALSO: Sweden to prescribe exercise to battle youth obesity
On Tuesday the government made a U-turn, however, as it presented an initiative to introduce more PE hours on the curriculum.
“It will give a better opportunity for PE teachers to reach those students who are the least physically active,” said Education Minister Gustav Fridolin, of the Greens.
As well as more PE hours, the government also wants to see an increase in other physical activities during school hours, such as aerobic exercises ahead of exams, or walks outside school grounds during breaks.
READ ALSO: Swedish parents block 'gateway' yoga exercises
The national curriculum already mentions daily physical activities, but the reality is different.
“It's unequal. The wordings (in the curriculum) are not enough to ensure daily activities in all schools,” said Fridolin.
A recent report from the Swedish Research Council for Sport Science (Centrum för idrottsforskning) found that only 22 percent of Swedish girls, and 44 percent of the boys, got the recommended minimum of 60 minutes' exercise per day.
Another report, from the Nordic Council of Ministers, showed that Swedish pupils were the most sedentary out of all Nordic school children.
The National Agency for Education (Skolverket) has now been tasked by the government with reviewing how the amount of PE hours could be increased by a hundred by 2019.
READ ALSO: Swedes work out the most in all of Europe

PARTNER CONTENT
Decoding the future: The college providing the skillset for next-gen jobs

PARTNER CONTENT
From ‘new kid’ to a young ‘man on a mission’: How boarding school gave Axel skills for life
Url copied to clipboard!