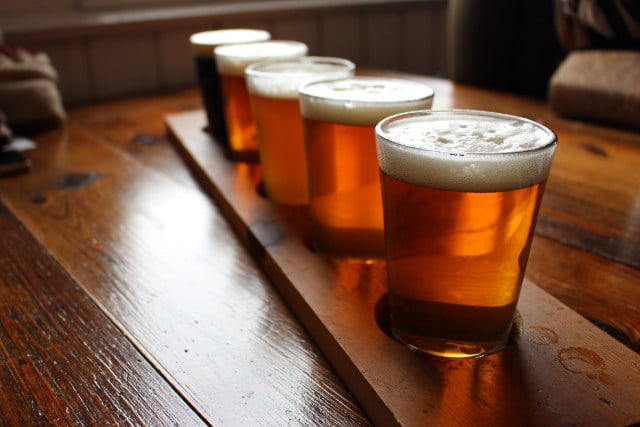 First of all, a quick distinction: most readers will have heard of microbreweries, a rising trend around the world that are something of a stand against the large corporate breweries dominating the market.

Located on a small island less than 30 minutes by boat from Nybroplan in central Stockholm, Fjäderholmarnas Bryggeri & Brewpub is quite possibly the most enjoyable of all on this short list.

Aside from the brewery, the visit include a trip to a beautiful island, where there are a variety of small shops with locals selling their craft products, plenty of angry geese, scrounging seagulls, and rocks to sit and eat on.

The brewery itself offers a very tasty assortment of beers. For “only” 189 kronor ($21) you can get the so-called “beer flight” – a tasting plank with five glasses of the beer they currently have on tap. Straight from the tank, by the way…

Though the inside is quite small, it's rather cozy, with large wooden tables and a nice view of the brewery. According to the bartender, the hops for the Hopsmuggler double IPA, made in collaboration with two American breweries, were smuggled into Sweden by the American brewers, hence the beer's name. Additionally, their sandwiches and burgers are just delicious!

Though it is only open seasonally (spring/summer), it definitely has no shortage of visitors and is absolutely worth the 145 SEK ($16) you pay for the boat ride. Situated on the waterfront at Södra Hammarbyhamnen in southern Stockholm, Nya Carnegiebryggeriet is quite big, but also quite expensive. The beer itself comes at a relatively normal Stockholm price, but the prices for food range from surprising to rather outrageous.

Even when ordering from the snack menu, you expect something a bit bigger than a bird-sized portion of what you asked for considering the cost, however delicious it may be.

Aside from the prices however, the staff are pleasant and the interior is amazing, with wooden barrels for tables and a nice view of the beer kegs behind the bar, to which tubes lead presumably straight from the tanks. The beers on tap are their regular labels and also some additional “special labels” which are seasonal and, according to the bartender, sold exclusively at the brewpub. Despite the price, it is definitely worth a visit.

Probably the best known of Stockholm's brewpubs, Monks is a well established chain of six restaurants, two of which have their own breweries.

There are two brewpubs (though perhaps “brew-restaurants” would be more fitting): Monks Café can be found in the city centre on Wallingatan, and Porter House is located in Gamla Stan in a dimly lit cellar, giving the whole restaurant a very old-timey look and atmosphere.

With brew master Charles Cassino, Monks has made a number of their own experimental beers, and according to their other brew masters, it often collaborates with home brewers and winners of home brewing competitions to create something new. Furthermore, the brewery at Monks Café holds special events such as festivals (usually with a geographical focus), or brewing courses, where people make their own beer.

The brew masters, working in their open and very accessible brewery, claim they let the people brew by themselves as long as they can safely handle the equipment. Monks Café therefore provides as much interaction as possible with not only beer, but the process of making it as well. Perfect for beer-enthusiasts! The case of the Stockholm Brewing Company is a curious one indeed. A small, organic brewery based in Södermalm that only opens their brewpub to the public on certain Fridays, it certainly experiments with beer making.

From using ingredients from surrounding parks and gardens to storing their beer in ex-wine oak barrels, their products sound very exciting indeed. For those who would like a taste of their beer, Stockholm Brewing Co. will participate in the upcoming Katarina Kegger Stockholm Brewers Festival in June and, according to the calendar or their website, will next open the brewpub on May 19th and 26th between 5-9pm. Anyone who really loves beer should also visit Omnipollos Hatt, which along with great pizza has its own beer – Omnipollo – on tap, but the brewery is not on the premises (though it is in close proximity).

Other tips include Katarina Ölkafé, which sells beer from multiple Swedish microbreweries, or The Swedish Brewing Company AB, which has a pretty hip bar in central Stockholm on Regeringsgatan.