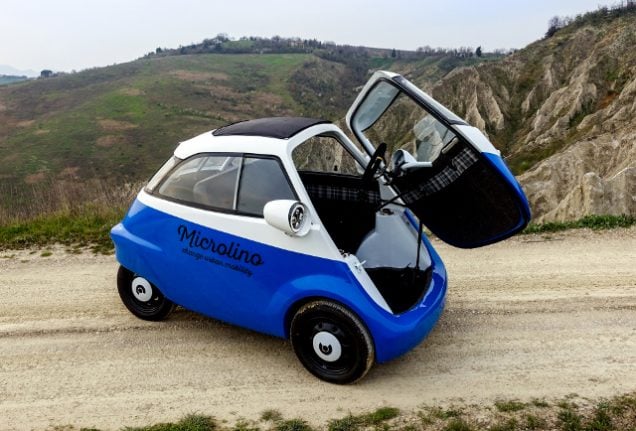 Photo: Micro Mobility
The Microlino is a small electric car designed for city use that its inventor, Wim Ouboter from the Swiss company Micro Mobility, intends to put into production at the end of this year.
Ouboter, who created the hugely popular Micro Scooter, drew up plans for the Microlino after seeing a TV report about the Isetta microcar that was popular in the 1950s.
Created by Italian company Iso Rivolta but licensed to BMW, the Isetta became known as a ‘bubble car’ for its distinctive shape, tiny size and unusual ‘fridge door’ front opening.
Though more than 200,000 were sold around the world, production of the Isetta stopped in 1962.
The original patent having expired years before, in 2015 Ouboter decided to create a new vehicle inspired by the Isetta but updated for the modern world.
His new electric version evokes the distinctive shape of the Isetta and has a similar front opening and compact size – measuring just 2.4m long.
Powered by a 15kW motor, it can accelerate to 90km/hr and has a range of 120km, making it suitable for commuting and short-distance urban journeys.
Ouboter’s first prototype launched at the Geneva Motor Show last year and the company now has 3,100 pre-orders for the 12,000-euro Microlino, his son and the company’s marketing director Oliver Ouboter told the Handelszeitung on Tuesday.
They hope to get 5,000 orders before putting the car into production with Italian manufacturer Tazzari by the end of this year.
The company will rely mostly on sales from Switzerland and Germany, though 200 orders have been placed by US customers which was “somewhat surprising”, said Ouboter junior.
It remains to be seen if sales of the new microcars will really take off – but the company has precedent for creating a craze.
Ouboter’s Micro Scooter became a worldwide success in the early noughties. Speaking to The Guardian at the time, he said he invented it to cover the “microdistance” between his Zurich home and his favourite sausage shop which was too far to walk but not far enough to warrant using the car.
Since then the company has expanded its range to include numerous versions of the scooter for all ages.
Switzerland is increasingly exploring green mobility and the options offered by electric power.
This year Swiss federal railways (SBB) is piloting a new ‘Green Class’ annual pass which includes use of an electric car as well as a first class train pass.
And earlier this year the Great St Bernard Tunnel installed Europe’s first high alpine fast charging station for electric vehicles.
For the past year the city of Sion has been testing electric-powered self-driving buses, in a first for Switzerland’s public transport system.