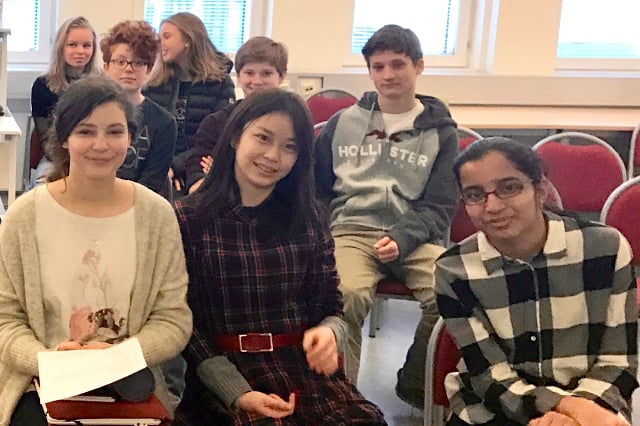 When you’re in 8th grade, it’s hard to imagine what you’ll be doing when you’re 30.

For anyone growing up in an international family, it’s not just a question of what to do, but also where to do it.

The opportunities – and challenges – that come with an international career are common themes for the young people studying at Stockholm International School.

And every year they have the opportunity to hear first-hand advice and inspiration from an impressive range of speakers at the school’s annual Career Day.

“How many of you would like a job where you work and travel in seven different countries, across four continents?” asks Hans Vestberg, former CEO of Swedish telecom giant Ericsson, at the school’s most recent Career Day in March 2017.

Almost every hand in the audience shoots up.

But knowing exactly what they want to do in those seven countries can be a bit more challenging.

“When I was in the 8th grade all I wanted to do was play sports,” Vestberg admits. “I never imagined I’d be CEO of a big international company.”

He goes on to tell how his first job after high school was as a nightclub janitor, eventually becoming manager of the whole establishment.

“That’s when I started thinking – hey, I’m good at this, maybe this is what I can do. I can manage people,” he says.

It’s that sort of insight and honesty – from a global CEO no less – that sets Stockholm International School (SIS) apart from other schools in the Swedish capital.

Founded in 1951, SIS is the longest-standing international school in Stockholm and delivers international curricula to students from preschool to grade 12. With a school community representing more than 60 nations, there is a strong focus on global citizenship and developing students who are valued, challenged and prepared.

Vestberg is now an internationally known businessman, Chairman of the Swedish Olympic Committee, and board member of the UN Foundation – none of which seemed like obvious career paths when he was a sports-crazed teenager uncertain about his future.

“His description of his uncertainty of his career at my age was easy to relate to, which added to my interest of his career story,” 10th grader Leo H. tells Stockholm International School student newspaper the Quirky Quibbler of Vestberg’s speech .

“I knew very early that I wanted to be a doctor – but I actually think it’s kind of crazy to ‘know’ what you want this early,” she says.

Gogineni was inspired when she visited India with her family as a child, and she watched her uncle, the village doctor, work.

“He wasn’t a doctor 9 to 5 – he was a doctor every minute of his life. People trusted him with all their problems.” Gogineni recalls. “I found his existence, his passion, and his role inspiring.” Gogineni spent as much time as possible around healthcare after that, to make sure it was her calling.

“I volunteered and did research, all in an attempt to make sure I was making the right decision,” she says. “If you’re curious about something, shadow a professional and see if it really is something for you.”

After a day of listening to dozens of professionals – from football coaches to journalists to ambassadors – the students felt inspired to find their own passions and shape their own career paths.

“We need to work hard and be committed – but it is useless if we don’t enjoy what we are doing,” concludes 10th grader Giordan Y, according to the Quirky Quibbler.

Of course, the emerging leaders currently enroled at SIS still have plenty of time to figure things out.

And the school, with its wealth of academic and career development opportunities, can help make the process a smooth one and ensure students are on the right track by the time they graduate – a theme that emerges in Gogineni’s message to SIS students.

“You don’t need to know in high school what you want to be when you grow up,” Gogineni says. “But you should start finding what sort of environment you thrive in. I encourage everyone to go to international school – and explore as much as possible.”

This article was produced by The Local Client Studio with additional reporting by the Quirky Quibbler and sponsored by Stockholm International School.

In a press release, the party proposed that treating more children in troubled city areas would help prevent gang crime, given that “people with ADHD diagnoses are “significantly over-represented in the country’s jails”.

The idea is that children in so-called “vulnerable areas”, which in Sweden normally have a high majority of first and second-generation generation immigrants, will be given “simpler, voluntary tests”, which would screen for ADHD, with those suspected of having the neuropsychiatric disorder then put forward for proper evaluations to be given by a child psychiatrist.

“The quicker you can put in place measures, the better the outcomes,” says Irene Svenonius, the party’s leader in the municipality, of ADHD treatment, claiming that children in Sweden with an immigrant background were less likely to be medicated for ADHD than other children in Sweden.

At a press conference, the party’s justice spokesman Johan Forsell, said that identifying children with ADHD in this areas would help fight gang crime.

“We need to find these children, and that is going to help prevent crime,” he said.

Lotta Häyrynen, editor of the trade union-backed comment site Nya Mitten, pointed out that the Moderates’s claim to want to help children with neuropsychiatric diagnoses in vulnerable areas would be more credible if they had not closed down seven child and youth psychiatry units.

The Moderate Party MP and debater Hanif Bali complained about the opposition from left-wing commentators and politicians.

“My spontaneous guess would have been that the Left would have thought it was enormously unjust that three times so many immigrant children are not getting a diagnosis or treatment compared to pure-Swedish children,” he said. “Their hate for the Right is stronger than their care for the children.