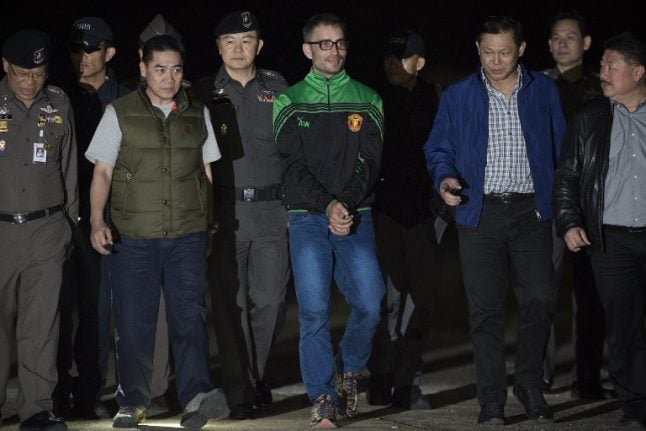 Artur Segarra walks handcuffed and surrounded by police officers after he arrived by helicopter at the Tha Raeng police aviation base in Bangkok on February 8th 2016. Photo: AFP

Artur Segarra, 38, was convicted of kidnapping and killing 40-year-old David Bernat in an effort to steal tens of millions of baht from the businessman, according to a verdict read out at Thailand's Criminal Court.

“Forensic evidence such as blood stains and fingerprints on (Segarra's) electric grinder had DNA that matched the victim,” the judge said, adding that CCTV footage and testimony from Segarra's maid and girlfriend also implicated him in the killing.

“Therefore the judge sentences the defendant to death on the grounds that he committed premeditated murder in order to steal the victim's money.”

While death sentences are still on the statute books in Thailand it is rare for prisoners to be executed. The last execution was in 2009.

Segarra's lawyer, Jessada Piyasuwanvanich, told reporters his client would likely file an appeal and “fight the case to the end”.

Segarra, who had denied all the charges, appeared calm while the verdict was read and translated to him in Spanish.

When he arrived at court he held his hand up to show the words “Luke 23:34” written in ink on his palm. The Bible citation is a reference to Jesus's final words on the cross.

The macabre murder came to light last January after Thai police began hauling body parts out of the city's Chao Praya River. It took them several days to identify the victim.

It is not uncommon for foreigners to get swept up in Thailand's criminal underworld.

Earlier this month an Australian man was sentenced to death for the murder of a former Hells Angels member found beaten and naked in a shallow grave in Pattaya, a popular Thai beach town known for its raunchy nightlife and links to organised crime.

In September, Thai police arrested three Americans in Bangkok after discovering the frozen body parts of another foreigner inside their freezer.

The men were charged with multiple offences and are being held in prison while they await trial. 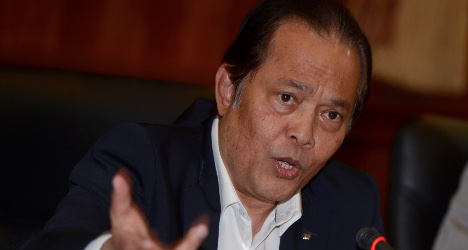 Worawi was replaced as head of the Football Association of Thailand (FAT) in a vote this month after a long scandal-filled tenure.

Fifa initially banned him for 90 days in October over ethics violations and extended that suspension by 45 days last month.

A Fifa disciplinary on Monday found that Worawi “was still involved in FAT affairs” during his initial three month suspension, breaching the terms of the ban.

Worawi, a Fifa executive committee member for 18 years until May, has faced multiple allegations of wrongdoing.

He was found guilty in July by a Thai court of forgery in his reelection as head of FAT.

He has denied all wrongdoing and frequently responded to his critics and rivals with public bravado.

Worawi was for years a staunch ally of disgraced Fifa president Sepp Blatter, who has been banned from the football for eight years over ethics violation.