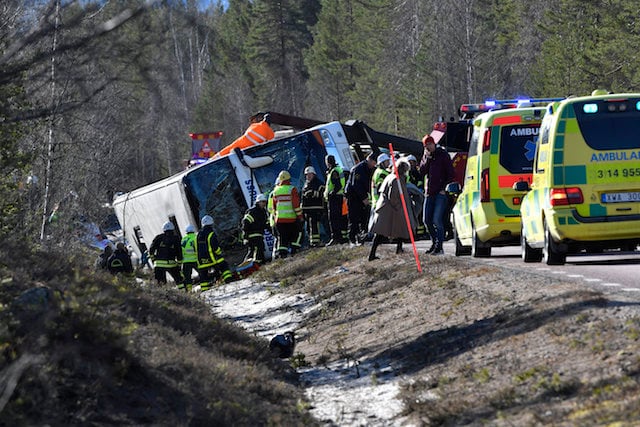 Photo: Nisse Schmidt/TT
The accident occurred at around 7am on Sunday, on the E45 road between Sveg and Fågelsjö in the Härjedalen county.
“It was like a war zone initially. There were children being treated in the ditches and practically everywhere,” Peter Nystedt of the Rescue Service told TT news agency.
At a press conference with the Jämtland Härjedalen Rescue Service, Peter Nystedt said the bus was carrying 59 people: 52 children and 7 adults. Three people died, and six were seriously injured. 19 people were reportedly moderately injured, while 31 were mildly injured or unharmed.
The school children, aged around 14, were on their way from the south-western town of Skene to a ski trip in Jämtland. One of the passengers told TT everyone was asleep when the accident occurred.

“I have heard the horrifying news of the bus accident near Sveg. It leaves me and the entire country in mourning,” Prime Minister Stefan Löfven said in a statement to TT.

The cause of the crash is still unknown.
Url copied to clipboard!