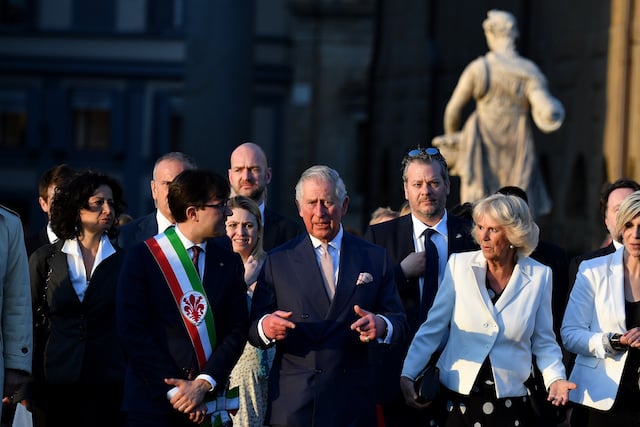 Prince Charles, Prince of Wales, and the Duchess of Cornwall, Camilla, with the mayor of Florence Dario Nardella when they arrived on March 31 for a six-day visit in Italy. Photo: Alberto Pizzoli/AFP
The Prince of Wales is expected to tour the historic town in central Italy and speak with survivors of last year's quake that killed nearly 300 people, and meet some of those helping with reconstruction efforts.
He will enter the abandoned “red zone” where collapsed houses lie next to the ruins of a 13th century Civic Tower, one of dozens of architectural gems in the region damaged by the August 2016 quake.
The prince is also scheduled to visit a Save the Children pavilion.
Charles, 68, who will succeed his mother Queen Elizabeth II on her death, is on a European tour with his wife Camilla which started in Romania and ends in Austria on Wednesday.
The charm offensive comes just as Britain this week officially triggered the Brexit process, becoming the first country to leave the European Union in the bloc's 60-year history.
Charles's son Prince William and his wife Kate undertook a similar trip to Paris earlier this month.
'Renaissance man'
The six-day Italian tour began Friday with a romantic stroll over Florence's mediaeval Ponte Vecchio bridge at sundown.
On Saturday, the prince paid homage to the victims of World War I in Vicenza, while Camilla, 69, visited “La Gloriette”, a pool-side villa overlooking the Gulf of Naples confiscated from a mafioso nicknamed “the madman” and now home to a project for youths suffering from mental illness.
While Charles is in Amatrice, Camilla will visit the Arcobaleno association in Florence which helps female victims of human trafficking — a hot issue in Italy during a time when the country is rescuing hundreds of thousands of migrants in the Mediterranean, including vulnerable women.
The royals will be back in the Tuscan capital Monday to attend a reception hosted by the Palazzo Strozzi Foundation to mark the 100th anniversary of the British Institute of Florence, where Charles will be honoured as the “Renaissance Man of the Year”.
The heir to the throne and the Duchess of Cornwall will meet Pope Francis and enjoy a tour of the Vatican the following day.
The visit to the hilltop beauty spot of Amatrice will not be the prince's first to a quake-hit zone. In 2004, Charles travelled to the scene of an earthquake that devastated the ancient Iranian city of Bam, killing over 40,000 people.
In 2006, he and Camilla visited Kashmir, where a quake claimed the lives of more than 73,000 people and displaced 3.5 million.
After the Amatrice disaster, Queen Elizabeth made a personal donation to help re-house the homeless and restore damaged churches.
On Saturday, protesters gathered in the region and in front of parliament in Rome to demand that the government speed up the construction of new quake-proof houses and help local farmers and businesses get back on their feet.
The town's mayor Sergio Pirozzi announced this weekend that the German government and a series of German companies would be paying for the reconstruction of the town's damaged hospital.
Before the quake, Amatrice was best known as the home of amatriciana, one of Italy's favourite pasta sauces.

The pound is on the slide once again and that means that for those of you living in Italy who have income in sterling, it could have a huge impact.

British pensioners living across Italy who received their income in pounds were particularly hard hit.