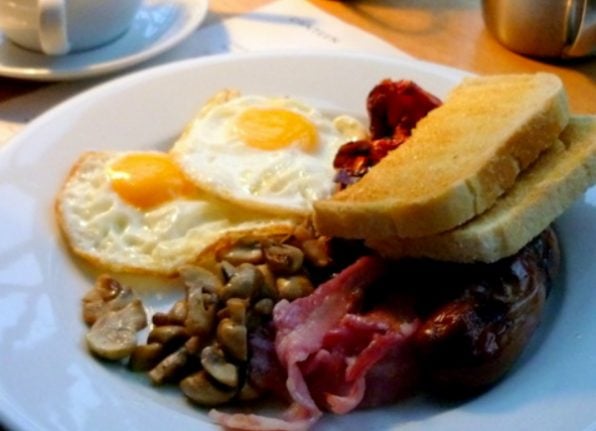 If you’re a British expat living in Germany like me, you’ve undoubtedly found that conversation frequently turns to Brexit and what it means for Brits in Europe. One critical but, to my mind, under-discussed consideration is the potential implications for that most important meal of the day: breakfast.

The German national breakfast is wonderful but sometimes, if we’re totally honest, it is more like an investigation into how many different varieties of cheese, meat, conserves, eggs and – most importantly – bread rolls one can reasonably fit onto the table without said table collapsing.

For a while my wife and I had one of these giant German breakfasts every weekend morning, but as time passed a uniquely British type of sickness started to grow in my stomach. It was a strange mix of homesickness and patriotism, expressing itself in a desperate craving for the English breakfast, that glorious combination of hash browns, baked beans, sausages, bacon, mushrooms, tomatoes, eggs, buttered white toast and brown sauce that leaves you sedentary, satisfied and sweating profusely.

Assembling a satisfactory English breakfast is challenging enough in England, where great debates rage over whether eggs should be fried or scrambled. Is it smokey or unsmoked bacon? Should it be toast or fried bread? Should tomatoes be included? And, if so, should they be tinned? Then there is perhaps the greatest controversy of them all – black pudding. (For the record, the correct answers are: fried; I don’t care, just give me lots; toast; a maximum of two fresh ones are acceptable; tinned tomatoes can bugger off; OH MY YES).

Friendships are made and broken over such debates. I can respect but not condone the decision to forgo black pudding, but if you dare to say that you think poached eggs go well with an English breakfast, I will ask you to leave the house and never return. Seriously. No, Chris, I still haven’t forgiven you.

The challenge of assembling an English breakfast in Germany is even more fraught with complexities. Bacon is not a problem, for Germans love their pork products, but finding a British style sausage is a challenge. You may say this is not a bad thing, but for me an intrinsic part of the English breakfast experience is using brown sauce to mask the flavour of mechanically recovered factory droppings. It is also possible to buy poor-quality sausages in Germany, but sadly they’re just not the same, no matter how much brown sauce you use.

Thankfully tomatoes, eggs and mushrooms aren’t a problem. Ask a German for a hash brown, however, and they will probably recommend you visit an Amsterdam coffee shop. Luckily this is just a language barrier issue – just ask for Rösti!

Alas, such cultural equivalency does not extend to baked beans, which are at best viewed with suspicion and at worst openly mocked as an example of terrible British taste in food. That this is outrageous almost goes without saying, but I’m prepared to accept a little baked bean mockery if it means my German friends will at least try them: I’m like a baked bean John the Baptist. Soon the world will understand.

But perhaps the critical ingredient is the last one. No matter how good the ingredients are, an English breakfast isn’t an English breakfast if it isn’t covered in brown sauce, and brown sauce isn’t brown sauce unless it has got ‘HP’ on the bottle. I don’t know about you, but there’s something about that particular combination of tomatoes, molasses, dates and vinegar that stirs up strange feelings that I can’t quite explain.

Sourcing the sauce is a challenge: it’s possible, though expensive, to buy it in Germany. I don’t know about you, but personally I book an extra piece of hold luggage just for HP sauce on flights back from the UK. Brexit may complicate this, though perhaps not quite as you might expect, for it turns out that HP Sauce with its iconic Houses of Parliament logo is actually one of us: a British expat who has been based in the Netherlands since 2007.

Politics aside, I’ve watched with unabashed joy as my German wife has fallen in love with the English breakfast. She tells me it is not entirely dissimilar to the Bauernfrühstück (farmer’s breakfast), a hash-like meal built around fried potatoes, bacon and egg. But there are obvious differences – not least the brown sauce and the baked beans.

That she enjoys copious slatherings of brown sauce on her English breakfast gives me a good deal of joy. Words cannot describe the mixture of pride and love I experienced the first time I witnessed her carefully arranging her plate so that her sausages formed a baked bean dam, for it was then I knew that she understood.

Garreth Brooke is a British expat currently living and working in Frankfurt am Main, where he teaches and composes music for the piano. Find out more at www.garrethbrokepiano.com