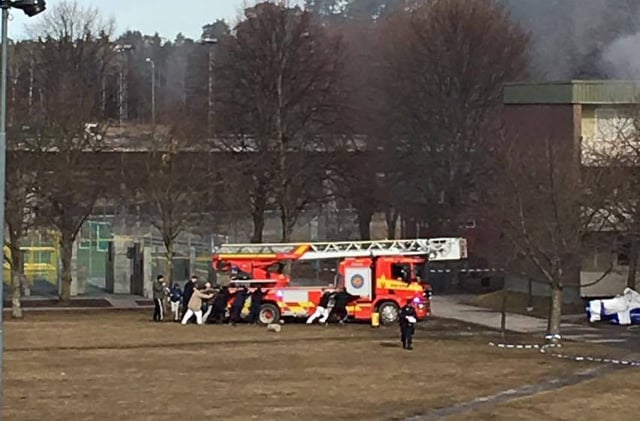 Tensta, along with neighbouring Rinkeby north of Stockholm, makes up one of 15 areas labelled “particularly vulnerable” by police in a report from 2015. It usually only manages to grab international headlines whenever there are reports of unrest or an attack on emergency services in the area.

But a picture which has now gone viral shows that this is far from the whole story.

It was taken when the fire and rescue services in nearby Attunda got called out to assist when a serious blaze broke out in Tensta last Thursday, but got their fire engine stuck in a muddy field near the scene. A group of around a dozen local residents quickly rushed to its aid, and with the help of a tow truck the vehicle was eventually freed. Locals rushing to the aid of the firefighters. Photo: Erica Heikenborn

Erica Heikenborn, who lives in one of the buildings near the fire, took the picture and told The Local she shared it on social media to offer a different perspective from recent negative reports of Swedish suburbs.

“I think it is tragic that such a skewed view is given of an area that has so much joy. There are many people who have lived here for a long time and are happy,” she said.

“Many people who come here say that they were afraid when they came here but are pleasantly surprised by how green and nice it is. Many people even come here from places far away to buy vegetables in the square and in our stores which have cheap food.”

“I think it's time to show the positive side and think it's great that my picture was spread as something positive.”

READ ALSO: What Rinkeby residents think of the riots Firefighters managed to put out the blaze, which is believed to have started in the attic of the building, a few hours later. Ambulances were also dispatched to the scene, but there were no reports of injuries.

“There is much to suggest that the fire occurred in connection with insulation work on the site,” police spokesperson Lars Byström told The Local on Monday, adding that a police investigation into “carelessness endangering the public” is still ongoing.

Stockholm's suburbs have hit global headlines in the past over incidents when stones were thrown at police and emergency services, and did so again recently after a violent riot in Rinkeby just a day after US president Donald Trump's “last night in Sweden” comments, sparking a debate about so-called “no-go zones”.

But Emil Westerdahl, head of Kista fire station, which covers both Rinkeby and Tensta, refuted the term and told The Local that such reports show only a small part of the story.

“Our area is just like other areas. We operate in a socio-economically vulnerable area, but that does not mean that everyone who lives there wish us ill. It happens occasionally that we are exposed to threats, but there is also a lot of kindness and good will,” he said.

“We don't have any no-go zones, absolutely not, the opposite in fact. We move around in all areas, with the same force, at the same speed. But sometimes we get indications, or see, that something is not right and then we take precautions. But I really want to emphasize that in those cases it's always cars or bins on fire, not residential buildings.”

Attunda's fire department was among the hundreds of people who shared the picture on Facebook over the weekend, calling it “a picture of Tensta and its residents which should be given more attention in media”.

A spokesperson told The Local: “It is important to us to highlight good news. We want to, together with the municipalities and their residents, work to reduce the number of people killed and injured in fires. We need our everyday heroes. They are often at the scene before the emergency services and can take initial action. Together we create an accident-free society.”