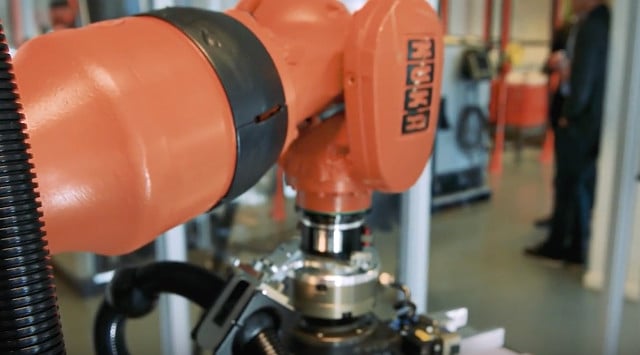 One of the robots that will be used. Photo: Uniti Sweden

In December, The Local wrote about Uniti Sweden's use of crowdfunding to finance a prototype electric city car, to be built with sustainable materials and capable of autonomous driving.

The campaign earned 1.1 million euros of investment from 48 different countries, and now, the company has announced that its production facility for the vehicles will be fully automated in partnership with Siemens Nordics – the first facility of its kind in the world.

“Theoretically we won't have to have humans. You could have the lights turned off in the building,” Uniti founder Lewis Horne told The Local.

“It hasn't been done to this degree before in auto manufacturing, because they're all building complicated steel cars. We get to start afresh with a car design based on all the latest stuff, and we can optimize everything for simplified manufacturing. Previously there were billion dollar factory set-ups, now, it’s a bunch of our engineers sitting with Siemens engineers working with software,” he added.

Along with the financial benefits, the upshot of an automated process is that in simplifying the manufacturing, the company's carbon footprint is lowered, meaning they adhere to the sustainable principles they committed to in their crowdfunding campaign.

“We can solve a whole lot more with a whole lot less factory size, materials, and batteries. If you want to make a car and call it sustainable, it’s not enough to just switch out a gas powered motor with a battery powered one. There's tech that can solve half of those problems and we're just putting it together in a neat package,” Horne explained.

The first prototype car is due to be unveiled in the autumn of 2017, while the manufacturing facility should be capable of producing 50,000 cars per year once it's up and running. The location is yet to be decided, but it will either be in Malmö or Landskrona in southern Sweden.

INTERVIEW: Has this Swedish startup crowdfunded the car of the future?

Anyone curious about what some of those robots will look like meanwhile (or rather, an “army of robots” as the startup calls it) can take a look in the video below.