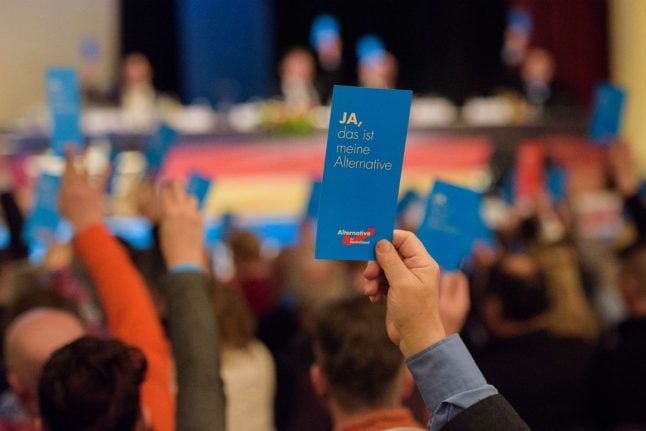 ow ow The Alternative for Germany party has struggled to reunite after a damaging split deepened by a hard-right member's comments on Germany's Holocaust guilt.

The protest party has also bled support as a strong mainstream candidate, the Social Democrat Martin Schulz, has emerged with a bold pledge to defeat their declared enemy, Chancellor Angela Merkel, in September elections.

This week, the AfD leadership sent out a letter to their almost 27,000 rank-and-file members, urging unity after a surge of infighting sparked by right-wing member Björn Höcke.

Höcke sparked national outrage in January when he labelled Berlin's Holocaust monument a “memorial of shame” and called for “a 180-degree shift” in the country's culture of remembrance.

The widely-deplored comments moved the AfD close to neo-Nazi rhetoric just as its public face, Frauke Petry, has sought to portray it as an acceptable conservative-nationalist movement, copying her French ally the far-right leader Marine Le Pen.

With the four-year-old party embroiled in civil war between its right and far-right wings, and Petry seeking to expel Höcke, the AfD urged members to “close ranks against the establishment parties”.

The appeal came as the party, after a string of state election successes, dipped from 15-percent poll support in December back to as low as eight percent in a recent survey.

For a long time, “a double-digit result in the national elections seemed a given,” wrote news site Spiegel Online. For the moment, it judged, “the euphoria is finished.”

The split is not the first for the AfD, formed in 2013 at the height of the eurozone crisis to protest against bailouts for indebted Greece and demand the abolition of the euro currency.

Petry led a leadership coup in 2015 as the party shifted focus to conservative law-and-order issues and “family values” and, above all, opposition to immigration, multiculturalism and Islam in German public life.

As a mass refugee crisis has brought more than a million asylum seekers to the EU's top economy since 2015, the AfD went from strength to strength, entering the opposition benches of 10 of Germany's 16 regional states.

In its most spectacular result, it won 20.8 percent in Mecklenburg-Western Pomorania, the ex-communist state where Merkel has her electoral district.

Political analysts now see multiple causes for the AfD's recent change of electoral fortunes – including fears sparked by the election of US President Donald Trump and his rapid and radical series of policy pronouncements on issues from trade to NATO.

“The chaotic administration of US President Donald Trump, who was celebrated at first, is now causing concern in view of the multiple crises all around the world,” said Manfred Gullner of the Forsa polling institute.

Other observers point to the fact that Merkel, an object of hatred for AfD followers for her liberal migrant policy, has increasingly moved to stop the influx.

“The AfD is losing importance because many of their policies have been adopted,” observed the Kölner Stadt-Anzeiger daily.

Güllner also argued that AfD supporters whose main aim is to end Merkel's 11-year reign are throwing their support behind Schulz, a candidate seen to have a decent shot at victory.

Since the outspoken former European parliament president declared his candidacy, his re-energised SPD has surged by around 10 points, beating Merkel's conservatives in several surveys.

Timo Lochocki, of think tank the German Marshall Fund of the United States, agreed that “if you want to get rid of Angela Merkel, you now have an alternative within the system”.

The AfD, meanwhile, could be due for another coup attempt, he predicted.

“Now that the party is dropping in the polls,” he argued, “the opponent of Frauke Petry can make a case saying 'your leadership is damaging the party'.”