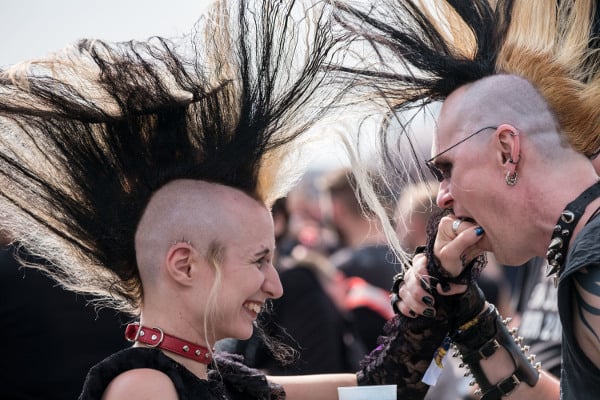 Punk hit Germany big time in the 1980s, spawning the Neue Deutsche Welle (New German Wave) music scene. With it came various hairstyles, chief among them the Mohawk – with a shaved head and spikey hair, in Germany it was the 1980s incarnate.

Now visible on the streets once more, it’s heralding the return of punk, especially in former East German cities like Leipizig. What goes around, comes around. Rudi Völler, a German football star of the '80s and '90s, rocking a Vokuhila. Photo: DPA

The mullet is the haircut that should be consigned to history, but for some reason isn't. Pictured above, this sexy snip reached its zenith in the 1980s, having been popularised in the previous decade by stars such as David Bowie and Rod Stewart.

In Germany it’s known as a Vokuhila, an abbreviation for ‘short at the front, long at the back’. Due to the fashion exploits of football star Rudi Völler and pop icon Dieter Bohlen, Germany came to own this hairstyle like no other country.

And while Rihanna may have tried to re-popularize it in the US in 2013, in Germany it never really went away.

Go into you local pub in the more working class parts of town and you'll likely see a an old dude with a belly large enough to balance a pint glass on top of sporting a wondrous greying mullet on his head.

Sneakers from an exhibition in the USA last year. Photo: DPA.

Together with Doc Martens and Converse  shoes, sneakers were the footwear of choice of the ‘80s . Characterised by their white appearance, big soles and boot-style extension up to the ankle, sneakers were certainly distinctive.

Now they’re all the vogue. Berlin is awash in a sea of white trainers, as retro makes a comeback. Apparently, in addition to being useful for sport, they go with any outfit. Who said fashion couldn’t be practical?

Berlin might be known for its techno scene, but Germany’s music taste isn’t always so edgy. Cheesy pop songs still go down an absolute treat here.

In fact, they’ve got an entire genre – Schlager music. This is a uniquely German music, their version of pop but more sentimental. 80s stars such as Matthias Reim (see video) continue to churn out concerts and albums, demonstrating its enduring popularity. There are even Schlager festivals.

But even if you can’t make it to one, just tune in to any German radio station. You can bet your bottom dollar that if Cyndi Lauper's Girls Just Want To Have Fun doesn't come on, then the Police or Phil Collins will. What's not to like?

The 2015 B-Movie explored hedonism in Berlin during the 1980s. Photo: YouTube.

In the 1980s, amidst rising cold war tensions, West Berlin was an oasis of pleasure and sin. According to one commentator, it was “an advert for hedonism”.

Now, amidst global political turmoil, Berlin is once again proving a magnet for fun-lovers across Europe and beyond. Young people are flooding to the German capital in pursuit of excitement. Then again, when hasn’t Berlin been an oasis of pleasure…

The '80s wasn’t all discos and dancing, though. Some readers might remember the hooliganism that marred English football in back then and even left English clubs banned from European competition after the Heysel stadium disaster, in which 39 people died in a crush.

Well, hooliganism is back. Two weeks ago top Bundesliga club Borussia Dortmund were sanctioned after their ‘Ultra’ fans attacked RB Lepizig supporters and police. This was followed nine days afterwards by arrests at Dortmund’s away match in Lisbon.

It’s not limited to Dortmund either. Across Germany the talk is of “increasing trouble in and around stadiums”. Politicians are anxious to nip this in the bud – this wouldn’t be a fun '80s rerun.

The East German Trabi car even has a museum dedicated to it in Berlin. Photo: DPA.

The socialist German Democratic Republic (GDR) may be in the past, but some remember it fondly. Over the past two decades a so-called Ostalgie – nostalgia for the old East Germany – has developed, and even spawned an industry.

The phenomenon was first popularised in the award-winning 2003 film Good Bye, Lenin!. Since then it has grown into quite a trade. You can find Ostalgie hostels, clubs, shops and even cars.

And it’s not just the goods that people miss. Some, especially in the east of the country, still speak of a “genuine sadness at the loss of a society in which social values and solidarity [were prime]”. Don't bet on the GDR making a comeback any time soon though.

Margaret Thatcher several years after the end of her term as UK Prime Minister. Photo: DPA.

A female head of government from the main right-wing party, seemingly in power forever. Sound familiar? Comparisons abound between Margaret Thatcher, the British Prime Minister in office for the entirety of the 1980s, and Angela Merkel, who has been German Chancellor for 12 years and is seeking a fourth term.

Of course, their status as two of Europe’s most prominent female political leaders might be the main factor. But there are similarities – both worked their way up to the top of the party machine unexpectedly, and knifed their party leaders to gain the top job. Whereas Merkel is renowned for her pragmatic politics, however, Thatcher was a rigid ideologue.

So a better comparison might be the current leader of the far-right Alternative für Deutschland, Frauke Petry. In fact, her own spin doctor spoke of making her ‘the German Thatcher’. Sometimes these comparisons write themselves.