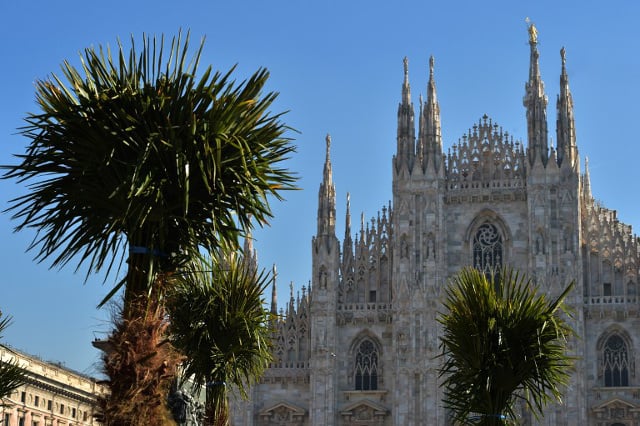 Adding insult to injury for some botano-nationalists is the fact that the planting project has been sponsored by Starbucks, the US coffee giant preparing for an assault on an Italian market based on the nation's cherished network of mostly independent bars.

The 42 palm trees, some of them five metres (17 feet) tall, are the first plants to be installed under a plan that also involves placing banana trees in the shadow of the 14th-Century Gothic cathedral, known as the Duomo. “Plants in urban green spaces don't necessarily have to be native, but planting these species in the Duomo Piazza seems like a neo-Gothic folly to me,” said Paolo Pejrone, a celebrated Italian architect and garden designer.

“Palms and bananas in Piazza Duomo! All we need now are camels and monkeys and we will really have Africa in Italy,” said Matteo Salvini, leader of the Northern League.

The far-right politician had already had his hackles raised by Starbucks' reported suggestion it could employ thousands of African refugees in its future Italian outlets.

“As far as their coffee is concerned, I'll be having mine somewhere else,” Salvini said.

Starbucks had the trees planted after winning a a competitive tender to renovate some of Milan's green spaces. But even centre-left mayor Giuseppe Sala did not seem completely convinced. “As a citizen I'll suspend judgement. Let's see when the work is finished,”he said. “Basically I don't dislike it, there is a historic reference there.”

'The brink of kitsch'

Palms are not native to Italy but are widespread in more temperate areas of the country, including Rome, the Riviera and Sicily, where their juxtaposition with the austere architecture of Norman cathedrals is a favourite holiday snap for visitors to the island.

Some palms in Italy are older than the country itself, having been brought to the peninsula initially by novelty-seeking aristocrats in the 18th and 19th centuries.

They were later championed by fascist dictator Benito Mussolini as symbols of Italy's short-lived African empire.

The ones in Milan are a cold-resistant variety deemed capable of resisting the northern city's chilly winters. But Perjone insisted they were just not right. “For sure, banana trees are a brave choice, on the brink of kitsch,” he wrote in La Repubblica.

“And palm trees are neither part of the future or the past of northern Italy. They are exotica for its own sake.

“The Duomo square is famously empty, a kind of mineral space. That is how it was conceived by the architect (Piero) Portaluppi and his vision deserves to be respected.”

Starbucks, which has repeatedly delayed its long-anticipated bid to conquer the home of espresso and cappuccino, is now planning to open its first outlets in Milan and Rome in the second half of next year, according to Antonio Percassi, the businessman spearheading the brand's introduction to Italy.

He told local media on Wednesday that the brand would aim to establish 200-300 outlets across Italy over the following five to six years.

PARTNER CONTENT
Winter getaways: the stunning Swedish region with something for everyone

Police and rescue teams outside the office building where a small plane crashed in the Milan suburb of San Donato on October 3rd. Photo: Miguel Medina/AFP

The single-engine Pilatus PC-12 had taken off from Milan’s Linate airport shortly after 1pm headed for Olbia in the north of the Italian island of Sardinia.

It crashed just a few minutes later into a building in San Donato Milanese, a town southeast of Milan, according to aviation agency ANSV, which has opened an investigation.

Witnesses said the plane was already in flames before it crashed into an office building undergoing renovations.

Petrescu’s 65-year-old wife, who also had French nationality, and their son Dan Stefano, 30, were killed.

Italian media identified the other passengers as entrepreneur Filippo Nascimbene, a 33-year-old from Lombardy, with his wife, young son and mother-in-law, who have French nationality.

Petrescu, 68, was one of Romania’s richest men. He headed a major construction firm and owned a string of hypermarkets and malls. He also held Germany nationality, the Corriere della Sera newspaper reported.

Flames engulfed the two-storey building, next to the yellow line subway terminus.

Deputy prosecutor Tiziana Siciliano was quoted by Corriere as saying that the plane’s black box had been recovered.