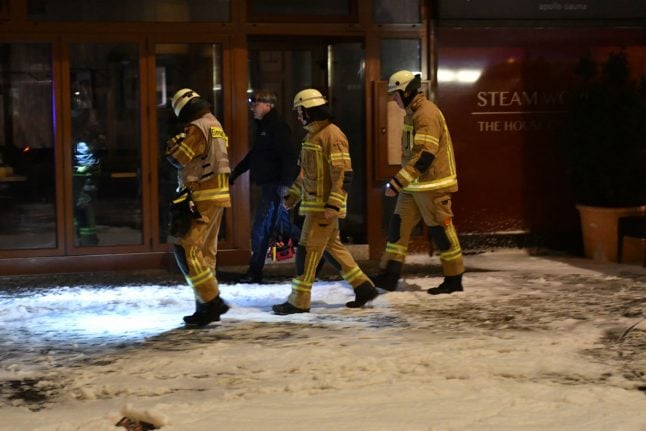 Fire crew at the scene in Schöneberg. Photo: DPA

A fourth man was brought to hospital with suspected smoke intoxication, a spokesperson for the fire service said. But the spokesperson ruled out the possibility of further victims.

The exact cause of death of the three victims initially remained unclear. A further 15 men were examined at the site of the fire, but were not found to have suffered any injuries.

Fire services were alerted at around 10.30pm and arrived in large numbers. A total of 80 fire crew rushed to the scene in 30 vehicles.

The fire was extinguished relatively quickly, with crews preventing the flames from spreading to an elderly care home on the floor above.

Customers of the establishment, many dressed in nothing but towels in the cold winter night, were provided shelter in a fire services van.

The sauna winds through rooms on the ground floor and in the cellar of a seven-floor building on Kurfürstenstraße in the Schöneberg district of Berlin.

The club, which consists of saunas, “play areas” and 60 or so single cabins, proved difficult for the fire service to search through.

“It was really hard work to break into every cabin and check if there was someone inside,” said the spokesperson.

At first several people were reported missing. Around 30 people were in the club when the fire services arrived.

According to Berlin tabloid BZ, the sauna in question is called Steam Works, which up until recently was known as the Apollo Splash Club.

The cause of the fire remains unclear. Berlin police are to begin an investigation on Monday morning.

Police and firefighters gather outside an abandoned building where a blaze broke out early on November 30, 2021 in Barcelona, killing four people. (Photo by Pau BARRENA / AFP)

“While we were battling the fire, we found four people. Emergency services tried to revive them but unfortunately they failed, they could not do anything to save them,” the head of the firefighting operation, Ángel López, told reporters.

Firefighters rescued four other people who were inside the building while putting out the blaze, he added.

Those four were treated for smoke inhalation.

Firefighters rushed to the scene at around 6 am after being warned that a blaze had broken out in the building, Mr Lopez said.

While Mr López said it was not clear how the four dead people were related, Barcelona-based daily newspaper La Vanguardia said they were all members of a Romanian family.

A spokesman for Catalonia’s regional police force, the Mossos d’Esquadra, said an investigation had been opened into the causes of the fire.

In December 2020, four people were killed after a blaze ripped through an industrial complex occupied by squatters, many of them African migrants, near Barcelona.

Over 100 squatters were believed to be living in precarious conditions at the abandoned complex in Badalona, a suburban town north of the city.

In addition to the four deaths, more than 20 people were injured in the blaze.