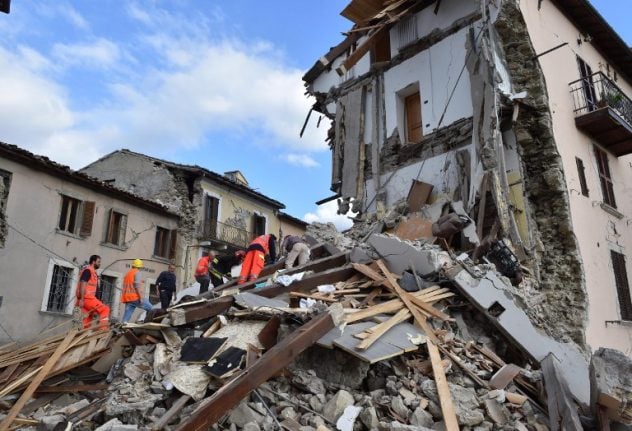 On Monday, 58-year-old Marche resident Enzo Rendina was arrested and jailed for two nights, accused of hampering firefighters' efforts by refusing to leave the town.

Now he has been banned by police from setting foot in Arquata del Tronto, at least until a hearing in late March.

Rendina is a native of Pescara del Tronto, a part of Arquata del Tronto, the worst affected town after neighbouring Amatrice and home to around 50 of the 299 victims.

“”I'm a victim. I saved other human beings, and put all my energy into helping – this is shameful,” Rendina told The Local on Thursday. He says that after escaping from his own collapsed house following the August quake, he pulled some of his neighbours from the rubble of their homes, and has assisted firefighters in the ongoing recovery work.

But while most residents were relocated to hostels and hotels along the coast, he refused, despite warnings from the town's mayor, firefighters, and Italy's special commissioner for post-earthquake reconstruction that he was risking his life.

He spent the next few months staying in tents provided by rescuers and the Civil Protection Department, and he says his determination to stay is due to fear as much as love for his town.

“They don't understand why I kept refusing to stay in a hotel,” Rendina said. “The earthquake changed me, I can't feel calm anymore and I can't sleep in a house built from bricks.”

After the heavy snowfall of early January made it dangerous to stay in a tent, Rendina stayed at a camp set up by the firefighters who were still carrying out recovery operations and snow clearance in the town.

He argues that his knowledge of the area was a help to the rescuers, many of whom came from northern Italy, and was shocked by his arrest on Monday, which followed an earlier cease-and-desist order. After two nights in jail, he was released on Wednesday under the condition that he stay away from Arquata del Tronto; he is currently staying in a hotel.

Rendina's lawyer, Francesco Ciabbatoni, told The Local he is hopeful that his client will be acquitted, and allowed to return.

“He has done nothing wrong. His only 'crime' is that he loves his land – it's a crime of love,” the lawyer said.

Recent weeks have seen residents from the earthquake-hit towns protesting in Rome over government delays in the recovery effort. Like Rendina, they are angry that the promised temporary housing has in many places still not been delivered.

One placard read: “Bureaucracy kills more than the earthquake”, and one of the protest's organizers told The Local: “It will take at least ten years to be able to return to our homes, and we haven't even been able to empty our houses and recover our furniture, our memories of our lives and those of our ancestors.”

The 2016 quakes left thousands of homes in ruins or structurally unsafe, emptying a string of villages and small towns across Italy's mountainous central regions, with an estimated 40,000 people forced to find shelter.