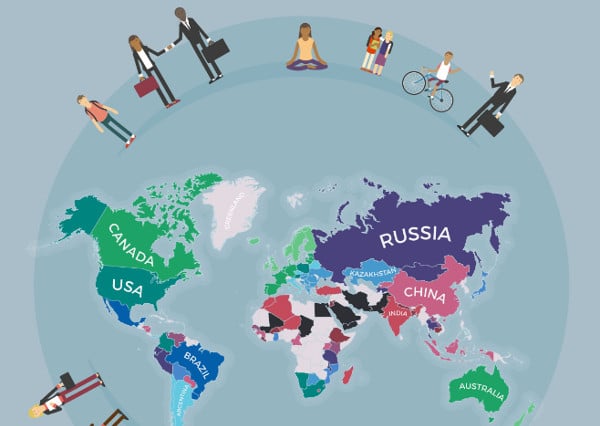 A new ranking by MoveHub, which lists countries around the world in order of how liberal they are, places Germany at 13th globally – a bit more liberal than Latvia and Australia, but not as liberal as the UK, Canada or Portugal.

“If you, like so many people in Trump’s America or post-Brexit Britain feel disconnected from your fellow countrymen and unsure about your future in your current country of residence and want to consider your options, do not worry, because MoveHub has compiled a list of the most liberal countries you could move to in 2017,” the report states at the start.

MoveHub, a website that helps people move abroad, used data from the World Economic Forum’s Global Gender Gap Report 2016, the 2016 Social Progress Index report and Yale’s Environmental Performance Index 2016. They then ranked countries based on factors such as gender equality, the rights of minorities, personal safety and environmental factors such as soil, air and water quality.

Iceland came in as the most liberal location, followed by Finland, Sweden, Norway and New Zealand.

While Germany fell into the top 15 countries worldwide for liberalism, the country's traditional parties have been upset over the past year by the sudden success of the far-right Alternative for Germany (AfD), which won seats in various state parliaments last year – including the typically left-leaning capital, Berlin.

The AfD is currently polling at around 15 percent nationally, and has gained much of its success based on its anti-immigrant rhetoric amid the large number of refugees arriving in the country.

In the gender gap report, Germany came in 13th place – perhaps surprisingly behind Burundi as well as countries like Nicaragua, Slovenia, the Philippines and Rwanda. A major part of this was because it was ranked so low (57th place) for women's economic participation and opportunities, as well as for health and survival. Germany was in fact ranked 100th for women's educational attainment.

Germany has one of the widest pay gaps in Europe, ranking only above seven other countries in an Expert Market report released in October. Women earn 21.6 percent less than men in Germany – which is a wider margin  than the European average of 16.5 percent, according to 2015 government data.

The discrepancy is in part down to the fact that women in Germany tend more often to work in low-paid jobs or sectors, or only part time.

But the country has passed legislation in recent years, hoping to shrink the gap through a wage transparency law, and a so-called “women's quota” for high level positions at big businesses.

In the social progress index – which examines countries abilities to meet basic human needs, provide foundations for well-being and create opportunities – Germany ranked 15th place, ahead of Belgium and France, but below Japan and Austria. This index noted that Germany fell behind due to its restrictions on freedom of speech and assembly, as well as for tolerance and inclusion.

The environmental index ranked Germany at 30th place, below Hungary and above Azerbaijan and Russia.

“I was most surprised at its ranking for the Environmental Progress Index at number 30, as I'd read recently that almost 100 percent of Germany's power had come from renewable energy in 2016,” Harriet Cann of MoveHub told The Local.

The environmental report explained that while Germany was known for having historically good environmental records, its ranking fell due to the report placing more emphasis on air quality, and because it was outperformed by countries that had shown greater improvements.

How many wolves are there in Sweden?

Wolves were extinct in Sweden by the mid-1880s, but a few wolves came over the Finnish border in the 1980s, reestablishing a population.

There are currently 480 wolves living in an estimated 40 packs between Sweden and Norway, with the vast majority — about 400 — in central Sweden.

How many wolves should there be?

In 2015, the Environmental Protection Agency was commissioned by the government to update the analysis,  and make a new assessment of the reference value for the wolf’s population size. It then ruled in a report the population should be maintained at about 300 individuals in order to ensure a “favourable conservation status and to be viable in the long term”.

Sweden’s right-wing opposition last week voted that the target number should be reduced to 170 individuals, right at the bottom of the range agreed under EU laws. With the Moderate, Christian Democrat, Centre, and Sweden Democrats all voting in favour, the statement won a majority of MPs.

“Based on the premise that the Scandinavian wolf population should not consist of more than 230 individuals, Sweden should take responsibility for its part and thus be in the lower range of the reference value,” the Environment and Agriculture Committee wrote in a statement.

Why is it a political issue?

Wolf culling is an almost totemic issue for many people who live in the Swedish countryside, with farmers often complaining about wolves killing livestock, and hunters wanting higher numbers of licenses to be issued to kill wolves.

Opponents of high wolf culls complain of an irrational varghat, or “wolf hate” among country people, and point to the fact that farmers in countries such as Spain manage to coexist with a much higher wolf population.

So what has the government done?

Even though the ruling Social Democrats voted against the opposition’s proposal, Rural Affairs Minister Anna-Caren Sätherberg agreed that the wolf population needed to be culled more heavily than in recent years. As a result, the government has asked the Environmental Protection Agency to once again reassess how many wolves there should be in the country.

“We see that the wolf population is growing every year and with this cull, we want to ensure that we can get down to the goal set by parliament,” Sätherberg told the public broadcaster SVT.

Sweden would still meet its EU obligations on protecting endangered species, she added, although she said she understood country people “who live where wolves are, who feel social anxiety, and those who have livestock and have been affected”.