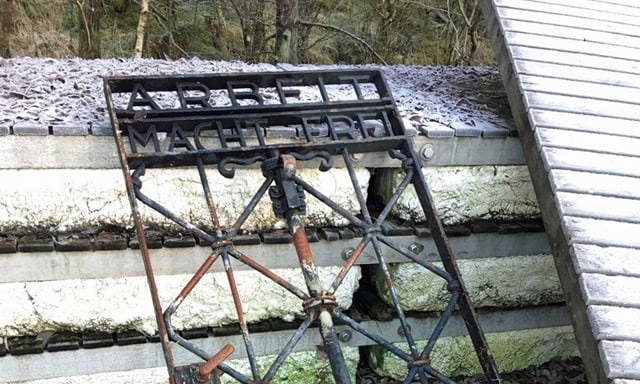 The gate was found in an outside location in the Norwegian countryside. Photo: Politiet/Scanpix
The gate, which bears the infamous slogan “Arbeit macht frei” (“Work will set you free”), was recovered in December in Gaupås in southwestern Norway following an anonymous tip-off.
“We do not know the gate’s history. We have no information on how it ended up in Gaupås,” police inspector Paal Duley told Bergensavisen on Tuesday.
Duley added that no DNA traces were found on the gate. No arrests have been made.
The person who provided the anonymous tip-off to police is unknown and no one else has stepped forward with additional information.
The 100-kilogramme black gate was reported stolen by German authorities in November 2014, sparking an uproar, with Germany's Chancellor Angela Merkel calling the crime “appalling”.
The gate is a 1965 replacement to the original one at the entrance to the Dachau camp, which disappeared after World War 2.
The Dachau camp, located just a few kilometres from Munich, opened in 1933, less than two months after Adolf Hitler became chancellor.
It was first used to incarcerate political prisoners but during World War 2, it became a death camp where more than 41,000 Jews were slaughtered before US troops liberated it on April 29, 1945.
Today some 800,000 visitors from around the world visit the camp each year.
Police in Bergen have contacted the Ministry of Culture to clarify how the port can be transported to Germany, where cultural authorities there eagerly await its return.
“It is a relief to me that this original evidence of the Nazis' cynicism and contempt for humans has been rediscovered,” Karl Freller, head of the Bavarian Memorial Foundation, said in a December statement after the gate’s discovery.