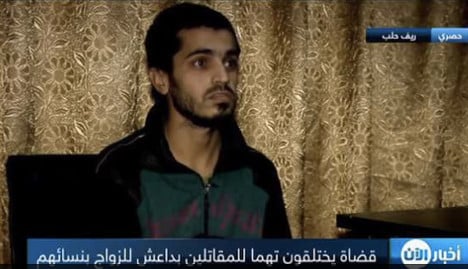 Mohammad Hallabia, the former sharia lawyer who made the claim. Photo: Akhbar al-An
Mohammad Hallabia, a former sharia lawyer who worked for the terror group before being captured by the Free Syrian Army territory, said that the man’s wife had been told her husband was dead.
“When she asked about her husband she received the information that he had been executed,” Hallabia told Akhbar al-An, a TV channel linked to the Free Syrian Army, according to Expressen.  “The judge who have the sentence against her man then took her as a wife.”
Hallabia said that the couple had been separated as soon as they  arrived in IS territory.
“The man and his wife are ‘muhajerin’ [immigrants] from Sweden. As soon as they made it to IS territory, they were seized by security agents,” Hallabia said. “The wife was placed in a guest house and the man was sent to a court hearing to see how he would be treated later.”
According to Hallabia, the wife was then told that her husband had been sentenced to death for spying.
It was only later that she discovered that she had been lied to, and that her husband had instead been jailed for eight months, but by this time the judge was already married to his wife. As soon as he was released, he was sent to the front where he was killed in battle.
According to Hallabia, this was one of two cases he was aware of where Islamic State’s shariah judges had abused their powers to get their hands on the wives of volunteer fighters. The other involved a couple from Tunisia.
The man told Sweden’s Expressen newspaper, which reported Hallabia's interview, that he did not know the name of the Swedish couple.
Murad Shawakh, the reporter who did the interview said that the couple were ethnic Swedish and not from an immigrant background.
Url copied to clipboard!