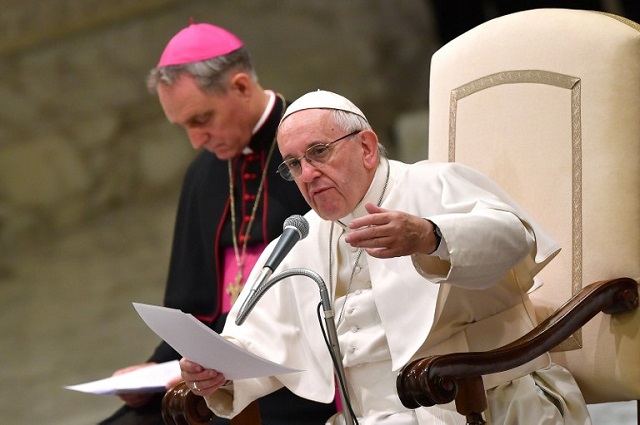 In his latest broadside against resistance to change in the Catholic Church's corridors of power, the 80-year-old pontiff warned that the reform process he launched in 2013 had to lead to more than a cosmetic “face-lift” or plastic surgery to remove wrinkles.

“Dear brothers, it's not the wrinkles in the church that you should fear, but the stains!” Francis said in his Christmas speech to senior Curia officials.

The blistering tone will have come as no surprise to the assembled staff. In 2014 he described some of them as hypocritical, status-obsessed careerists who were suffering from “spiritual Alzheimer's”.

This year he set out 12 principles guiding the reform he wants to see. One of those was “catholicism” in the sense of “all embracing”, and it was under that heading that he made arguably his most significant comments.

Referring to the Vatican dicasteries, or departments, that he has sought to streamline and reorganize, Francis said it would be “appropriate” to bring in more lay people, especially where their expertise made them more competent than staff drawn from the clergy.

“The development of the role of women and lay people in the church and their appointment to leading roles in the dicasteries, with particular attention to multiculturalism, is furthermore of great importance,” Francis said.

As things stand, all the dicasteries, including those shaken up by Francis, are headed by religious figures, and the Curia has been a clerical closed shop for centuries.

A lack of professional expertise within the Vatican was notably highlighted by recent scandals centred on the Holy See's finances, which exposed problems in ensuring transparency and reliable controls on waste and mismanagement.

'Inspired by the devil'

Francis has made the introduction of modern accounting standards for every department one of his reform priorities. But his efforts appear to have hit obstacles and an audit by PriceWaterhouseCoopers was halted earlier this year.

Women within the Church have long campaigned for a greater role in its governance.

Francis agreed earlier this year to study the historical role of female deacons in the first centuries of the Church, a move which some have seen as potentially opening the door to women entering the clergy.

Such a move would involve a major change in Church thinking and would be hugely difficult to deliver.

But there is no such fundamental obstacle to women being given top jobs in the Curia, with the issue being one of culture and tradition rather than doctrine.

Francis said he did not see all resistance to his reforms as necessarily bad.

But he hinted at a toxic atmosphere when he railed against both “hidden” and “malevolent” resistance, describing the latter as being inspired by “the devil, often dressed in lamb's clothing.”

Separately, but in a potential reflection of simmering tensions inside the Vatican, Francis announced on Thursday an investigation into goings-on at the Order of Malta, a Church-linked charity body descended from the crusading knights of the Middle Ages.

The move follows the dismissal earlier this month of Albrecht Boeselager, the order's Grand Chancellor, amid suggestions he was too liberal for the tastes of Cardinal Raymond Burke, who acts as the order's liason with the Vatican.

Burke, an American, is a prominent conservative figure who has been outspoken in his criticism of Francis's efforts to reform Church teaching on questions related to the family, marriage and divorce.

Reports in the specialist Catholic press have suggested Boeselager was targeted because of a row over the use of condoms in Africa to prevent the spread of AIDS – something conservatives say violates Church teaching but has been deemed acceptable by Francis and his predecessor Benedict XVI.

By Angus MacKinnon and Catherine Marciano