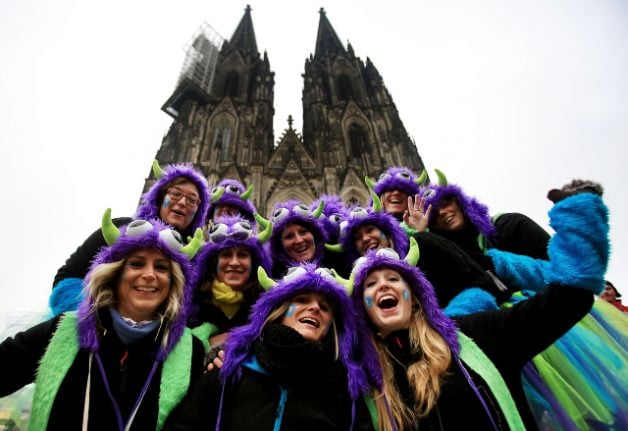 The Rhineland encompasses parts of the German states of North-Rhine Westphalia and Rhineland-Palatinate, including major cities like Cologne, Bonn, Essen and Düsseldorf.

Its regional dialect is known as Rheinisch (Rhenish), which unfortunately, along with several other regional German dialects, is threatened with extinction according to a UNESCO report. So what better time to try and keep this quirky dialect alive?

There's also Kölsch. As well as being a type of beer from Cologne, it's also a special dialect from the city. You might want a few phrases ready to impress your Kölner friends when you're at Karneval, dancing in a clown costume on top of a Donald Trump float.

So sit back, relax and let the sweet sounds of Rheinisch and Kölsch wash over you.

Yes, you read it right. No need to put your hands over your children's eyes, this one is actually about coffee. As a guest, have you ever been asked if you want a coffee and said yes expecting a brimming French Press, then been lumped with a thin cup of the instant stuff?

Well people from the Rhineland have a word for that: Muckefuck. Your Rhenish host might not be too pleased if you describe their best cup of Nescafe as Muckefuck. It's a name they use for poor quality coffee that combines the Rhenish Muck, or mud/cloudy broth, and fuck, lazy.

Another fun sounding word. Have you ever been in the Rhineland and wanted to complain about an out-of-date apple a grocer just sold you? Me too… “Excuse me mate, but this fruit you just sold me is fuckackig”. Don't worry, it won't get you into a mass brawl with the locals – it's a word that people use to describe the decay that takes place in a fruit once it starts to go off.

Hulk Hogan got in trouble when a tape of him poppen his best friend's wife was leaked. Photo: DPA.

Parental advisory warning. Ever wondered how to be successful in love in the Rhineland? If you're ever stuck for another way to describe rolling in the hay then poppen is the verb for you. For example, “David and Heidi have been up there for a while, they must be poppen”. This Rhenish word for sex means the same thing as saying ficken or vögeln in German. Congratulations, get your coat, you've popped.

English speakers with a basic level of German will know that familiar, particularly sweet sounding, phrase Ich liebe dich, or I love you. The way someone from Cologne can express a strong feeling of affection for another person is by saying Isch han disch jän. It might be useful to learn this phrase before you start asking people about poppen.

FC Köln have been playing some good Fuppes in this season's Bundesliga. Photo: DPA.

Due to the popularity of table football, English speakers across the world will be familiar with the phrase Fussball, but they are less familiar with a bit of Fuppes. The Rhenish word for the beautiful game not only baffles English speakers, but other Germans and linguists, who are still puzzled as to just how and why this word sprang up in the Rhineland area.

Remember Fuppes and you won't feel left out when bantering with the locals at the next Bundesliga match in a Rhineland sports bar.

Sometimes you've got to take a leaf out of The Dude's book. Photo: DPA.

Et es wie et es is Kölner for 'It is how it is'. This Cologne saying is for the Big Lebowski fans among you, those apathetic Local readers who just accept life and get on with it. It's a must know phrase to help you cope with the traumatic timeline that was 2016.

A Großkotz is a show off, a blow hard or a generally arrogant person. Kotz came from the Yiddish word 'kozin' for lord or leader, which entered into Rhenish and gained negative connotations. German speakers from Rhineland added Groß, or large/great, to the word to emphasise the particular loutishness of the person.

An example of who could be labelled a “Großkotz” would be a person who boasts about their vast personal wealth, or that their private jet is bigger than Air Force-1, or about how they grab women by the genitals.

Scooby Doo is a bit of a Tütenugel. Photo: DPA.

Tütenüggel is a word used in both Rhenish and Kölsch meaning someone who is foolish or whimsical. The word has changed over time, being used more recently to describe something akin to the German Weichei, or wimp. While it can be used as an insult, it can also be used affectionately. The meaning is thought to come from the original verb tötern, which to inhabitants of the Eifel region of Rhineland meant simple-minded babbling. To be nickelig is to be stubborn and uncooperative. The Local's list seems to be full of insults, and this one will only come in useful in the north of Rhineland and the Ruhr region. The word reportedly appeared due to the widespread popularity of the name Nikolaus and its shortened form Nickel in the Middle Ages, coming to stand for a devious person.

So if your friend is refusing to leave Karneval at three in the morning, insisting that the girl on the float was definitely waving at him alone, tell him to stop being so damned nickelig.

Reportedly what the captain of the Titanic said before they hit the iceberg. Photo: DPA.

Et hätt noch immer jot jejange would be Es ist noch immer gut gegangen in German, or in English: 'It's gone well so far'. The optimistic people of Cologne seem to be great at coming up with phrases that look on the bright side of life. It seems like a good phrase to end this list on, to prove that things aren't all doom and gloom.

Plus a free Rhenish course from none other than Konrad Adenauer, former German Chancellor and Cologne native: