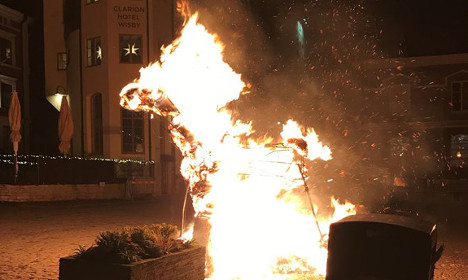 The smaller goat, which stood at Donners plats square in Gotland’s largest town Visby, was discovered burning during the early hours of Tuesday morning by a passer by, who then alerted the emergency services.

It was engulfed in flames by the time fire fighters arrived, and now only the steel skeleton remains. A police report of vandalism has been filed.

Determined not to be beaten by the arsonist, the local trade association now plans on cleaning the frame and covering it with new Christmas lights to make it festive-looking again – though this time they will skip adding straw. The Gotland goat in its former glory. Photo: Magnus Olsson

The huge straw yule goat is built in the central Swedish town every year, and this year its 50th anniversary is being celebrated, but that didn’t stop someone from mercilessly burning it to a crisp. The recurring destruction of the goat, year after year, has given it a degree of international fame.

This year’s blaze happened so soon after launch that the organizers behind the Gävle Goat toyed with the idea of rebuilding it before Christmas.

They even set up a poll on Facebook to ask local residents if they wanted a new one, but on Tuesday it was decided that constructing a fresh straw animal would be too time consuming, and a smaller goat built by local high school students will be moved to the place where the bigger version once stood instead.

A replica of the bigger goat, the smaller version is also made of straw, and it is hoped that it won't meet the same fate as its predecessor.