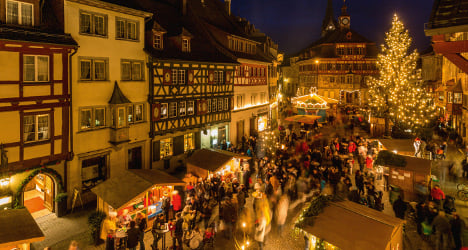 Shoppers can beat a path through the crowds along Montreux’s lakeside, get into the festive spirit at Zurich main train station, browse the stalls outside Basel’s cathedral and sip mulled wine in Bern’s Münsterplatz.

These big and bountiful markets are rightly well-known. But there are plenty of others that are well worth a visit too. So this year, try something different and pay a visit to one of these Christmas markets instead (or as well – nobody’s counting how much glühwein you glug…)

Interlaken’s Christmas market takes place alongside its festive centrepiece, the huge ‘Ice Magic’ complex which sets up in the town centre for the third year in a row. Browse the stalls before taking to the ice for a spot of skating on its five different rinks linked by runways. You can even try your hand at Bavarian curling on a dedicated three-lane covered rink. Ice Magic remains open until February.

Set in and around the town’s medieval castle is a traditional Christmas market that’s less frantic than some others. Kids will love the ice skating rink, while adults can quaff local beer and pick up artisan gifts and regional produce on the stalls.

With 160 stalls packed into the wooden hall near Morges rail station, this is the biggest covered Christmas market in French-speaking Switzerland. Most of its artisan products are made in the area, so it’s just the place for picking up authentic Swiss-French stocking fillers.

Christmas in Lausanne is always a bit alternative thanks to its annual festival of lights, which sees light installations set up around town. So far, so festive – except they rarely have a Christmassy feel. Last year’s festival included a giant face sporting some pretty bizarre expressions stuck to department store Globus, ghostly figures floating over Place de la Palud and giant pencils over Rue Centrale.

This pretty medieval village in the Jura is lovely to visit at this time of year when its small Christmas market brings added atmosphere. Stylish stalls line the cobbled streets and a 100-year-old carousel is a delight for kids.

Resembling a mini version of Bern’s Old Town, Murten – or Morat in French – is well worth a visit for its beautiful medieval old centre, and there’s no better time than when its Christmas market takes over for three days in December.

It’s only a small town, but Einsiedeln in the canton of Schwyz has possibly the most spectacular setting for a Christmas market of any in Switzerland – in the main square in front of the Benedictine Einsiedeln Abbey.

The town makes the most of this by staging a large market of 130 stalls that’s become known as one of the best in the country. As an added bonus, visit the town’s small museum devoted to gingerbread, an Einsiedeln speciality also sold on the stalls.

Winterthur’s Christmas market is celebrating its 20th birthday this year with an extra special programme. Shop for handmade candles, jewellery and gingerbread at the 100 wooden chalets set up in Neumarkt, enjoy the line-up of live music and don’t miss the Santa Claus parade on November 27th.

It may only be on for a few days but Bremgarten’s large Christmas market attracts visitors from far and wide. As well as a whopping 320 stalls, there’s traditional music, carriage rides and children’s entertainment including storytelling, a treasure hunt and a carousel.

The stunning medieval Old Town of Stein am Rhine, near the German border, is taken over by Christmas festivities every December with stalls, beautiful lights and plenty of child-friendly entertainment. This year’s festival takes the theme ‘Puss in Boots’ – every Saturday and Sunday there’s a free guided tour of the town led by the booted feline himself.

Even though it’s still officially autumn in Switzerland, it’s beginning to look a lot like Christmas, as the song says.

Towns big and small are preparing to celebrate the holiday season in — so far, at least — a pandemic-free environment. In fact, the festive mood makes it easy to forget that in 2020 markets were closed, and in 2021 some places required a Covid certificate to enter.

While most markets in Switzerland will open at the beginning of December to coincide with the start of the Advent on December 1st, some will be inaugurated this week and next.

This is an overview of where you can begin the Christmas season in November.

Starting on Thursday November 17th, the Vaud capital will inaugurate small Christmas markets in various locations throughout the city:

Various activities from Christmas shopping to eating, drinking, and entertainment for the young and old will be plentiful at all the sites.

The traditional market, located in the middle of a lakeside urban park, is opening on November 18th.

Like any Christmas market worthy of the name, it will feature an artisan market where you can purchase holiday decorations and other trinkets, as well as enjoy typical fare like mulled wine and raclette. (Christmas purists may argue that melted cheese is not really a ‘typical’ holiday dish, but you are, after all, in Switzerland).

As a complement to the Jardin Anglais site, Geneva’s second Christmas market, on rue du Mont-Blanc, will open on November 24th.

As each year, it will feature a wide range of artisanal products and local specialities. 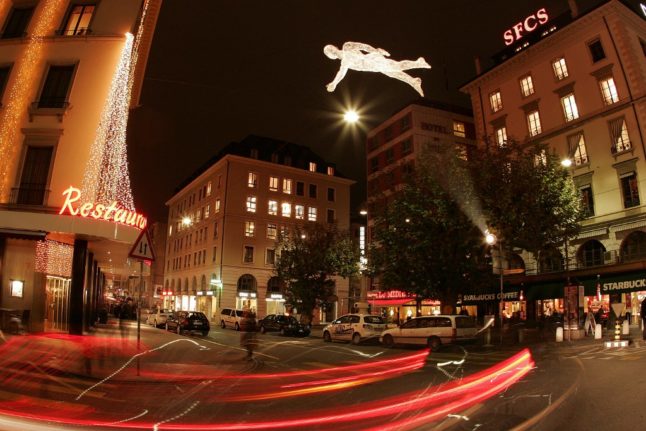 A lit statue  ‘floats’ over a Geneva street at Christmas. Photo by FABRICE COFFRINI / AFP

Scenically located along the shore of Lake Geneva, the “Montreux Noel” market is one of the country’s most famous Christmas fairs.

Attractions include Santa Claus / Father Christmas flying on his sled, as well as special activities inside the legendary Chillon Castle, located just a snowball away from the cite centre.

Spread across two squares, Basel’s annual Christmas market – open from November 24th – is one of Switzerland’s largest and most picturesque.

About 200 booths offer an array of things traditionally associated with this holiday, from exquisite hand-made ornaments to regional delicacies. 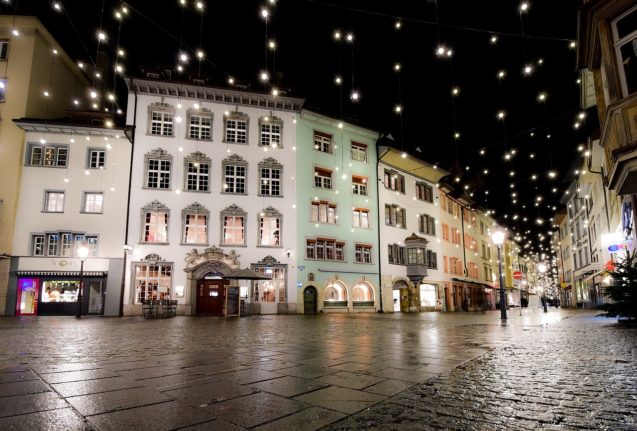 Switzerland’s largest city has not one, not two, but FIVE Christmas fairs spread around town, all opening on November 24th: at Sechseläutenplatz, Old Town, Bahnhof, Münsterhof, and Werdmühleplatz.

They include attractions like a singing Christmas tree, one decorated with 7,000 crystals, along with gifts, decorations, food, and drink.