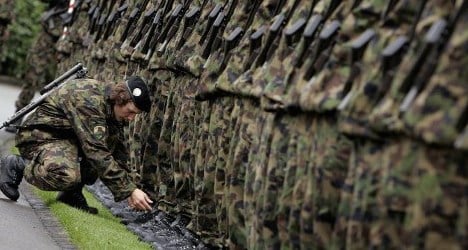 According to the Rundschau programme on national broadcaster SRF, factory workers are being paid the Romanian minimum wage of 300 francs a month before deductions.

The Swiss army has ordered 80,000 pairs of combat boots from the Italian manufacturer AKU, which has factories in Romania.

The army recently switched to a new type of Gore-Tex combat boot  – the KS14 – which soldiers will wear on marches.

Another 50,000 pairs are to be delivered in the next two years. According to the report, which was picked up by Swiss newspapers, factory workers receive two francs an hour – not enough to live off.

Employees interviewed by the programme said that even working full time they could not afford to cover their rents and travel costs and had to take out loans.

“The salary we pay is the Romanian minimum wage,” the factory director confirmed, but added that this was a starting level and only around 20 percent of workers were paid so little.

“As the buyer, the Swiss government dictates the purchase price, and therefore also what the workers earn,” Corina Ajder of the NGO Clean Clothes Campaign told the programme.

“Made in Europe should mean that the products are made fairly, but that is not the case,” she said.

Armasuisse, which buys the boots on behalf of the army, said it implemented the laws in force and could not comment on the criteria used to award the contract.

Switzerland’s law on procurement requires that minimum standards be adhered to – such as a ban on child labour – when awarding contracts for government equipment.

A revision now taking place may result in social standards being taken into consideration along with price when making decisions on awarding contracts.