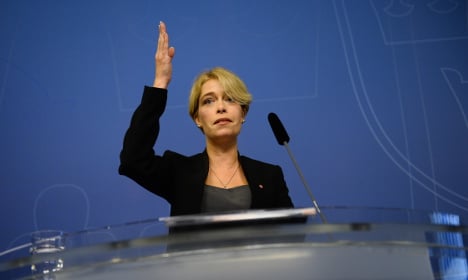 Delmon Haffo was fired from his job as digital communicator for the Moderate party's office in Stockholm on Thursday afternoon after the incident, the party secretary Tomas Tobé confirmed to Aftonbladet.

Haffo and his colleagues had been trying out their video camera at around noon, seemingly unaware that others could see and hear all their comments in the live clip on the party's own YouTube channel.

In the clip, Haffo refers to a Twitter argument that started when Social Service Minister Annika Strandhäll commented on a friend's Facebook page last week after they joked that men's voting rights should be withdrawn after Donald Trump was elected as the next US president.

“I have also had that thought, I should admit,” wrote Strandhäll at the time.

In the video, which has since been removed from YouTube, Haffo turns to the camera and says: “Annika Strandhäll, it was not okay to joke about men's right to vote. Go to hell, you whore.”

He then adds that the press spokesperson at the social ministry, Victor Harju, “is a whore too”.

Laughter is then heard from around the room.

Speaking to the Dagens Nyheter newspaper on Thursday afternoon, the party leader of the Moderates, Anna Kinberg Batra, condemned the comments.

“It is completely unacceptable,” she said. “It is not funny. This sort of thing should not happen.”

“Actually, it's quite simple. You may criticize your opponents for politics that's wrong or when ministers do the wrong thing, but you must never make foul comments to other people or cross the line – regardless of the party who does it. There's too much of that at the moment, I think.”

Strandhäll commented on the incident on her Facebook page, writing: “We all have a responsibility for setting the tone. This is language we don't accept in a classroom, then we can't accept it in politics either.”

“As politicians, we often want to be role models for those young people who are often the most active on social media. We all have to ask ourselves what image they should have of adults in politics.”

Haffo had not commented on the video by 4pm on Thursday.