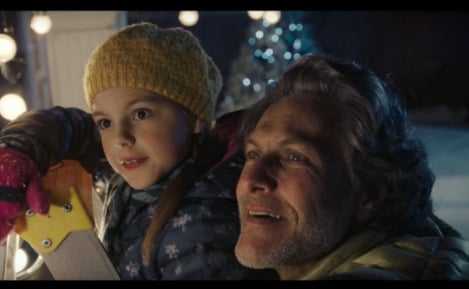 The advert has already attracted a lot of attention after Edeka's TV slot last year seriously stirred up emotions.

This year’s TV advertisement is accompanied by their hashtag #zeitschenken (literally “give time as a present”), with the tag line “The best gift is time spent with you”.

It calls on adults to spend more time with their children around Christmas, rather than worrying about chores and preparations.

The one-and-a-half-minute film shows parents having to organise everything around Christmas, but forgetting about their children, who look on feeling lonely and neglected.

The voice-over explains how hectic everything is in the weeks before December 24th, saying: “Still need that, still need this, can’t have anything amiss. Still need stuff from every store. Still need to do so, so much more.”

But, after one father realises that he needs to pay his daughter more attention as he tries to put up the fairy lights, the tone changes, and the families stop worrying and start spending time together.

Mirroring the opening lines, the narrating mother tells parents: “Don’t need that, don’t need this. Don’t mind if anything’s amiss. One thing makes it all worthwhile. That’s being here for you, my child.”

The video, posted on Tuesday evening, had already had over 200,000 views by Wednesday afternoon. Many tweeters reacted to the new video, with both positive and negative reviews.

Peter Feder saw the advert rather differently, posting: “Let's hear it for guilt-tripping or what? Finding it difficult… #Zeitschenken”

Digital consultant and blogger Thomas Knuewer also wrote that “the Edeka ad demonstrates how hard it is to find creative people in Germany. Edeka hasn't managed it.”

The advert follows Edeka’s controversial 2015 TV advert that showed a grandfather having Christmas lunch on his own year after year, as his whole family tell him they can’t make it.

The video ends with them all having Christmas lunch, but only after a dark twist teaches the families that they need to cherish time together while they still can.

While criticised by some for being too manipulative, the 2015 advert now has over 50 million views on YouTube.

That is almost double the number of views than the 2015 advert of British chain John Lewis, which has become famous for its seasonal tear-jerkers.