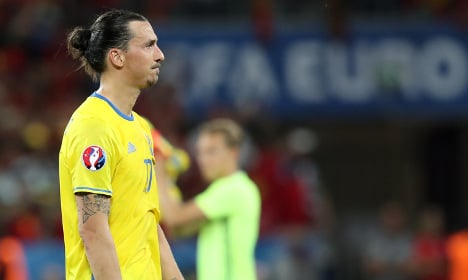 Zlatan Ibrahimovic at the end of his final match for Sweden. Photo: Thanassis Stavrakis/AP

“There is a future after Zlatan,” Sweden's sports minister Gabriel Wikström told AFP. “I am sure there will be new fantastic football players from Sweden. We've had them before.”

After a dismal showing at Euro 2016, Sweden's all-time high scorer put an end to his 116-cap international career in June, in which he scored 62 goals, leaving big football boots to fill.

The Swedes are now turning the page to begin the post-Zlatan era, leaving the national team to launch not only a new line of attack but a rejigged team after the retirement of other key players.

“We have a team with cooperation,” Wikström said. “The point is that (we) stand together … the team will be able to perform better.”

Sweden's draw with the Netherlands (1-1), a narrow but important victory against Luxembourg (1-0) and a strong showing against Bulgaria (3-0) gave the impression that the national team is growing well, keeping it safe from criticism.

For Ibrahimovic, Sweden is no longer a place to play football, but he could come to the annual football awards on November 21, where a tribute to his international career is in the making. He could then win the prestigious National Golden Ball award for the 11th time.

The yellow and blue team cannot afford the luxury of nostalgia, as it faces a tough game in France on Friday.

“It's going to be a difficult match. France has many world stars in its team,” Wikström said. “I believe in Swedish victory.”

Without Ibrahimovic, known for his large grin and fierce attitude when facing the press, everything has become less colourful around the team.

The public most likely shares his opinion, as fewer than 22,000 people came to watch Sweden's match against Bulgaria last month.

Ibrahimovic's every match with Manchester United is dissected carefully, perhaps even more so than during his time in Paris. But few people will ask him to come back, as there is too much respect for his choice, at the age of 35, to avoid the strains of international football.

In his working class neighbourhood of Rosengård in Malmö, with a high immigrant population, veneration for Ibrahimovic is still the same.

“It's Zlatan who fixes the whole team. Without him it's not worth watching,” Ahmad Ali, a 17-year-old fan, told AFP. “I might watch highlights or something,” he said, referring to Friday's game against France.

For 29-year-old Massar Nazam, who will watch the game on TV, there is hope of new superstars emerging in Sweden.

“Zlatan leaving the Swedish football team means Sweden has to find new players, it has to find a solution to the problem,” he said.

This feature was written by AFP's Hugues Honoré and Soren Billing.