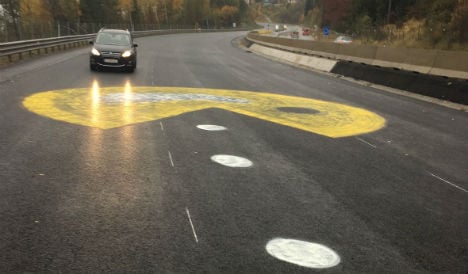 The cult Pac-Man symbol from the video game series, which became popular as an arcade game in the 1980’s, was sprayed by “unidentified perpetrators” on the A2 motorway in the state of Styria.

It was 12 metres wide and covered all three lanes of the road. The graffiti artists also sprayed a giant cherry symbol on the road’s surface.

Asfinag, the company responsible for maintaining Austria’s roads and autobahns, said that the sprayers had targeted a section of the motorway that is only due to be reopened to traffic at the end of November.

The area of asphalt damaged by the graffiti covered around 400 square metres. A team from Asfinag removed the paint with a cleaning vehicle equipped with a high pressure hose on Monday. They couldn’t confirm how much it cost to clean the road.

Walter Močnik, a press spokesman for Asfinag, confirmed that the company has contacted the police about the damage and that if the graffiti sprayers can be identified they could be liable to pay for the damage. Pac-Man gets eaten by a cleaning vehicle. Photo: Asfinag