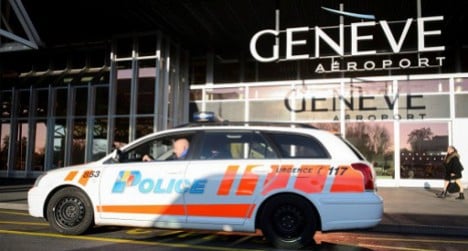 The Aeroflot service to Moscow was preparing to take off at around 1pm on October 13th when the man told staff at an airline desk in Cointrin airport there was a bomb on board.

As a result the plane was recalled and its 115 passengers evacuated, before bomb disposal officers examined the plane for explosives.

Questioned by police at the scene, the man who made the claim later admitted he made it up, saying it was just a joke.

According to Le Matin he did it to hold the plane up, since he was late for the flight himself.

Already sentenced to six months in prison, he could now be served with a 50,000 franc bill for the police operation, reported Le Matin on Monday.

The bill is based on the cost of mobilizing 101 police officers as well as five or six security officers, said the paper.

“We had to stop the plane, search it, secure the area, calm passengers. That quickly involves a lot of people,” police chief François Waridel told the paper.

Earlier this summer another bomb hoaxer was given a prison sentence after claiming someone was carrying a bomb at Geneva airport.

The hoaxer, a Frenchwoman, also faces a huge bill for the massive police operation she caused, though as yet the issuing of the 90,000 franc invoice has been tied in red tape between Switzerland and France, according to Le Matin.