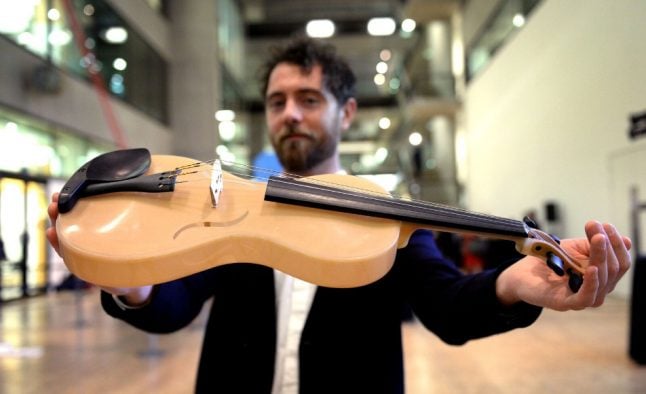 Luca Alessandrini, a post graduate student at Imperial College London, created a violin using spider silk and resin – which you can see in action in the video below.

When you play the violin, the vibrations of the silk create a unique tone, and Alessandrini says the material allows more precise customization of the acoustics than other modern fibres do.

His invention won him the £10,000 top prize in The Mayor of London’s International Student Innovation Award 2016, which aims to showcase the work of international students in the English capital.

He said at Wednesday's awards ceremony that he hopes to use the prize money to fund his startup, which will make more musical instruments using biomaterials.

Other finalist entries included a vaccine delivery system, water-repellent paint made from recycled chicken feathers and an app aimed at ending the need to queue in shops. The entries were judged by a panel of top industry experts from the worlds of design, technology, art and science.

Alessandrini originally comes from Urbino in the Marche region, but described studying in London as “one of the best experiences in my life.”

Sadiq Khan, Mayor of London, said at the prize-giving: “The incredible range of talent on show in these awards celebrates the best of the capital.”

He added: “We need to do all we can to ensure that London remains the best and most welcoming destination for international students.”

London is home to over 100,000 international students, including a significant number of Italians, many of whom feel they face an uncertain future after the UK's vote to leave the EU in June.

Experts in Italy have said that Brexit would hit the thousands of young Italians who have their sights set on the UK.

“Fees for Italian students at UK universities will more than double, and stricter border controls will see many young Italians heading to different countries to find work,” Franco Pavoncello, a political science professor and president of Rome's John Cabot University, told The Local following the vote.

PARTNER CONTENT
How a medieval Swedish city is shaping the future
Url copied to clipboard!