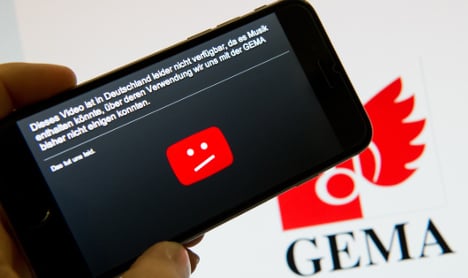 As newcomers to Germany discover to their dismay soon after arrival, it’s been quite difficult to watch music videos in the Bundesrepublik for years now.

This is because of a long dispute between the video-sharing site and GEMA, Germany’s state-authorized copyright collecting society, which represents the copyrights of more than 70,000 artists.
A court ruled in 2012 that YouTube could be held liable for posts on the site containing music whose rights are represented by GEMA. Since then, YouTube has had to censor videos containing music from major artists – so that’s why you may not have been able to watch Rihanna’s latest music video while all your friends outside Germany were writing about it on Facebook.
GEMA had long argued that YouTube should pay for copyrighted music on the site while YouTube countered that it could not be held responsible for all content posted.
But on Tuesday morning, that annoying red emoji face that used to show up on blocked videos had been removed, after the two groups found a resolution, a GEMA spokeswoman told DPA. The block will only continue for artists who are not part of GEMA and assert other rights.
Thanks to the agreement, artists who are members of GEMA will also be paid for YouTube videos. The new agreement will even apply retroactively back to 2009, when a previous license agreement expired and the battle began.
“For GEMA and its members, this contract agreement with YouTube is a milestone,” GEMA negotiator Thomas Theune told the Frankfurter Allgemeine Zeitung (FAZ).
“Around 70,000 composers, lyricists and music publishers finally have [secured] a contribution for the use of their intellectual property on YouTube. They will finally be involved in the success of their musical works which YouTube generates. This is also a sign for other online platforms.”
YouTube called the agreement a “big day for music in Germany” in a statement online.
“This is a win for music artists around the world, enabling them to reach new and existing fans in Germany, while also earning money from the advertising on their videos.”
YouTube and GEMA have remained silent on how much will now be charged per video under the new agreement, according to FAZ.

The collection society had lost a case in January against YouTube in which it demanded €1.6 million in compensation for 1,000 musical clips posted on the site. The demand amounted to €0.375 per music video view.