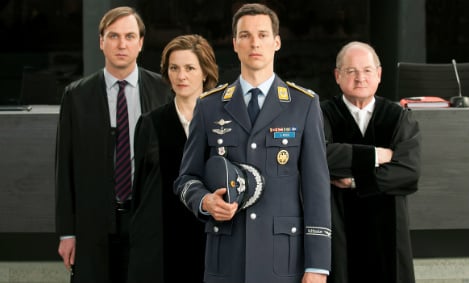 A military pilot shoots down a hijacked plane with 164 people on board to save the lives of thousands in a packed stadium that was the target of a terrorist plot.

Is he a hero, or guilty of murder? That is the question viewers were asked to answer in an interactive television show broadcast late Monday in five European countries.

“Terror – Your Verdict” turned couch potatoes at home into a jury judging the fate of fictional German air force major Lars Koch, who fires a missile at the Lufthansa passenger jet.

“If I don't shoot, tens of thousands will die,” he says in the thriller as he takes aim at an engine of the Airbus A320, flouting the orders of his superiors.

The plane bursts into flames and comes down in a potato field, killing everyone aboard including militants from an Al-Qaeda offshoot who planned to use the airliner to target a soccer match between Germany and England.

At the Munich stadium venue, 70,000 fans are blissfully unaware that they have been spared death due to the actions of the young military pilot.

In the television show, an adaptation of a successful play by bestselling author Ferdinand von Schirach, Koch sits in the dock on 164 counts of murder.

The scenario has been debated since the suicide hijackings of September 11, 2001 in the United States as a kind of modern trolley problem, the classic ethical thought experiment.

In that hypothetical conundrum, a person must choose between allowing a runaway trolley to run over five people tied to railway tracks, or to pull a lever and send the trolley barrelling into one person on another track.

After 9/11, then US vice president Dick Cheney said the military would have been justified if they shot down the airliners to prevent them crashing into the World Trade Center and the Pentagon.

However Germany's constitutional court ruled in 2006 that such action would violate Article One of its Basic Law, that human dignity is inviolable.

In the case of “Terror – Your Verdict”, viewers in Germany, Austria, Switzerland, the Czech Republic and Slovenia were asked to vote guilty or not guilty online or via a telephone hotline.

The programming chief for German public broadcaster ARD, Volker Herres, said the audience was invited to become part of the plot.

“The viewer is yanked out of the passivity of television watching,” he told the Bild daily. “He is actively called upon to become both an affected person and take a decision.”

In the end, overwhelming majorities called for Koch to be acquitted, with more than 80 percent of viewers in Germany, Austria and Switzerland finding Koch not guilty. An actor playing the presiding judge read out the verdict, with both options filmed in advance.

The normally prosaic Bild pointed up the philosophical thicket revealed by the show “pitting eternal natural law against the Protestant ethic of responsibility, which demands a conscience-based decision in every situation”.

Von Schirach, the grandson of Hitler Youth leader Baldur von Schirach, is a trained lawyer and one of Germany's most popular crime writers.

The play had already drawn more than 163,000 people to theatres in cities including Berlin, Tel Aviv, Caracas and Tokyo.