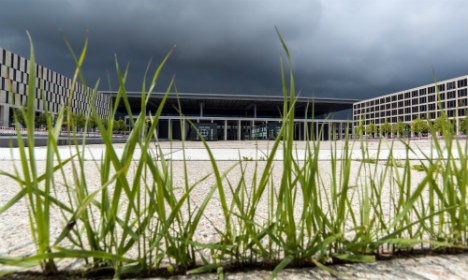 The state court of Brandenburg in Cottbus on Wednesday sentenced Francis G. to three and a half years in prison on a bribery charge. Francis G. must also pay a fine equivalent to the €150,000 bribe he took from the firm Imtech.

The sentence was just short of the three years and eight months demanded by the prosecution.

The court found that Francis G. had taken the money in exchange for allowing Imtech's claims for additional payments of €25 million to pass through review without being checked.

Imtech, which has since gone into insolvency, was responsible, among other things, for the construction of the fire safety system at the airport, deficiencies of which are the main reason for its opening having been delayed by at least six years.

Two former employees of the firm were also convicted on Wednesday. The men received probationary sentences of one year and eleven months, and one year and three months.

At the start of the trial in August the 48-year-old Francis G. admitted to taking the €150,000 bribe, in three rolls of €500 bills, from one of the other defendants in an Autobahn car park. He claimed however that he did not make any promises in exchange for the cash.

The two ex-Imtech employees also did not deny that the payment had taken place but said that Francis G. had made the demand for it.

In his closing remarks, the judge said it could not be sufficiently established on whose initiative the bribe was made.

Berlin authorities have pledged that BER airport will open in 2017, six years behind schedule, but have as yet given no official opening date.

On Wednesday BER project boss Karsten Mühlenfeld said “we believe there is still a chance that the opening date will be in 2017.”

But as building at the site remains unfinished, with testing phases still to come, many have voiced scepticism at how realistic such a timetable is.

A woman walks past the offices of Deutsche Bank in London. Photo: Tolga Akmen / AFP
The bribery case relates to illegal payments and to false reporting of those sums on the bank's books and records between 2009 and 2016, the Department of Justice said in a press release.
The bank “knowingly and wilfully” kept false records after employees conspired with a Saudi consultant to facilitate bribe payments of over $1 million to a decision maker, the DOJ said.
In another case, the bank paid more than $3 million “without invoices” to an Abu Dhabi consultant “who lacked qualifications… other than his family relationship with the client decision maker,” the DOJ said.
In addition to criminal fines and payments of ill-gotten gains, Deutsche Bank agreed to cooperate with government investigators under a three-year deferred prosecution agreement.
In the commodities fraud case, Deutsche Bank metals traders in New York, Singapore and London between 2008 and 2013 placed fake trade orders to profit by deceiving other market participants, the DOJ said.
The agreement took into account Deutsche Bank's cooperation with the probes, DOJ said.
“Deutsche Bank engaged in a criminal scheme to conceal payments to so-called consultants worldwide who served as conduits for bribes to foreign officials and others so that they could unfairly obtain and retain lucrative business projects,” said Acting US Attorney Seth D. DuCharme of the Eastern District of New York.
“This office will continue to hold responsible financial institutions that operate in the United States and engage in practices to facilitate criminal activity in order to increase their bottom line.”
“We take responsibility for these past actions, which took place between 2008 and 2017,” said Deutsche Bank spokesperson Dan Hunter, adding that the company has taken “significant remedial actions” including hiring staff and upgrading technology to address the shortcomings.
SHOW COMMENTS
Url copied to clipboard!