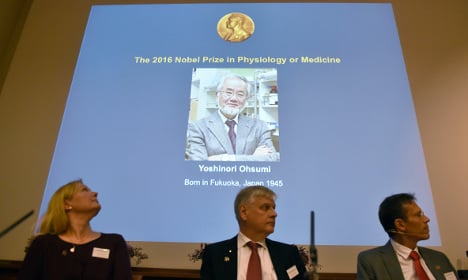 LIVE BLOG: Behind the scenes at the Nobel Prize announcement

Recent controversy involving sacked Karolinska Institute researcher Paolo Macchiarini has cast a shadow over this year's run-up to the Nobel Prize in Physiology or Medicine in Stockholm.

The Italian celebrity surgeon was fired earlier this year following a series of allegations, including falsifying research and CV details, claims which he denies.

More heads at both the Karolinska University Hospital and the Karolinska Institute, where the body that hands out the Medicine Prize is based, have since rolled, including those of Nobel judges Harriet Wallberg and Anders Hamsten – two former bosses of Sweden's top medical university.

It was against this backdrop that Japanese cell biologist Yoshinori Ohsumi was announced as the 2016 winner of the prestigious award for his work in examining autophagy, a process which makes cells destroy their own contents by recycling and degrading unnecessary components.

Christer Höög, professor of molecular cell biology and a member of the Nobel Committee, spoke to The Local after Monday's announcement, saying he hoped it would be an opportunity to turn over a new leaf.

“It is really nice to speak about something good that has actually happened. It has really been a great day to tell the world that we are doing our job, we have generated and informed you about a new fantastic discovery,” he said.

We just spoke to the Nobel Committee's professor Christer Höög about Ohsumi's work. Even I understand it better now! https://t.co/h02yVTZZy5 pic.twitter.com/A03h9bUhDe

Ohsumi, a professor at the Tokyo Institute of Technology, was born in Fukuoka, Japan, in 1945. He received his PhD from the University of Tokyo in 1974, where he established his own research group in 1988 after three years at Rockefeller University in New York.

The concept of autophagy, which means 'self-eating, first emerged in the 1960s, but it was not until Ohsumi carried out a series of experiments in the early 1990s that underlying mechanisms were understood. He used something as simple as baker's yeast to identify essential genes for autophagy and was able to show that similar mechanisms are at work in our own cells.

“It’s an enormous gamechanger,” said Höög. “The basic physiology was there without this discovery. Everything is working in the body. But this is as big as discoveries on DNA replication, the way we deal with DNA repair, it’s similar to DNA repair in a sense because in DNA repair research you deal with DNA molecules. Here, you deal with cell structures which need to be taken care of.”

“So without this waste system (…) you get a complete mess. Because you cannot identify, package, transport waste, and waste is happening all the time, every day in your body. You need to get rid of it. Otherwise it just piles up, you accumulate it, and you get sick. It is really, really important. The discovery is fundamental and has an enormous impact,” he added.

Höög said that the research is still in its early stages, but that an increasing number of publications, studies and clinical trials are being conducted to follow on Ohsumi's work and find out more about autophagy.

“It’s not my expertise but if you look at the clinical trial information you can see there are a number of clinical trials in phase two, phase one. I think like with all drug development nowadays, some of them will work, some will not because these are early days. This is such a basic system, so you don’t really want to mess with it too much, if you do something wrong you’ll either get rid of waste too efficiently – i.e. healthy cells – or you’ll not affect it. It’s going to be complicated to develop drugs, but in the end it’s so basic,” he said.

“So for degenerative diseases, for example, if you can really get rid of toxic processing like that in a tailored way, that would be very very important.”

Ohsumi was in his laboratory in Tokyo when he received the phone call from Stockholm on Monday morning, telling him he had won the 2016 Nobel Prize in Physiology or Medicine.

“The first thing he said was 'aaah',” said Thomas Perlman, Nobel Assembly secretary, at the press conference. “He seemed surprised.”