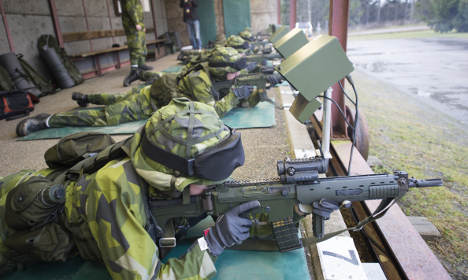 Bringing back the draft could help a stretched military, a government inquiry says. Photo: Fredrik Sandberg/TT

The report suggests that young men and women should be made to complete questionnaires for future recruitment to the Armed Forces from July 1st 2017, while the obligation for those selected to complete basic military training would then apply from January 1st, 2018. Young adults born between 1999 and 2000 would be the first age group affected.

Under the new system, which is designed to help an increasingly stretched Swedish Armed Forces, the number of people called to obligatory service would depend on the volume of standard recruits available. It is expected to take in a few thousand drafted recruits each year.

“Not enough people are being recruited in the current system,” commented Annika Nordgren Christensen, who headed the inquiry.

Sweden formally ditched conscription in 2010 after 109 years, moving to an army comprised entirely of voluntarily enrolled employees. Shortages in military staff numbers however led the government to commission its inquiry into bringing back the draft in some form.

The conclusion is that a worsening security situation as well as the the ill preparedness of Swedish defences mean that the new conscription model needs to be implemented swiftly.

All 18-year-olds in Sweden are already required to answer a questionnaire on the Swedish Defence Recruitment Agency’s website regarding their health and physical condition. The information provided will be used when conscription is reintroduced.

The new proposals will now be put through a four-month consultation period where courts, state agencies, local governments and NGOs will have a chance to respond.

Defence Minister Peter Hultqvist said that he hopes a solution to dwindling staff numbers can be found.

“I hope we will be able to find a way to have a more stable, robust and functioning staffing system. I hope there will be broad support for it too, even if the government already has the mechanisms of reintroducing the draft at its disposal,” the Social Democrat minister noted.