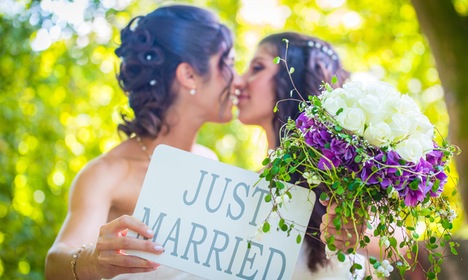 The former nuns have asked for anonymity; this photo is representative only. Photo: Pexels

But their story is a little bit different: the 44-year-olds are both former nuns.

Federica is Italian and Isabel South American, and both women used to belong to the Franciscan order, named after the current pope's namesake Francis of Assisi.

They fell in love during a mission and have been together for three years, according to northern Italian daily La Stampa, which shared the ex-nuns' story on Wednesday. Federica and Isabel have asked for anonymity as they start their new life together.

They will tie the knot on Thursday in Pinerolo in Piedmont, northwestern Italy, in a ceremony officiated by mayor Luca Salvai, from the Five Star Movement.

But getting to this point wasn't easy; before the union could take place, the woman had to go through the formal process of cutting their ties to their order and the Vatican.

After the municipal ceremony, women will then receive a religious blessing from ex-priest Franco Barbero, who himself was suspended from the Church in 2003 due to his support of gay marriage and criticism of Catholic doctrine. Since then, he has written books and a blog; it was through this network that he met the former nuns.

Theirs will be the 20th civil union he's officiated this year, and Barbero said Federica and Isabel's story was “like all the love stories in the world”.

“They got to know each other slowly, and discovered they had deep feelings,” Barbero told La Stampa. “They are two marvellous people, with very deep faith. They reflected for a long time and took the decision courageously, knowing it wouldn't be accepted.”

He also said that this is not the first union of two ex-nuns he has blessed.