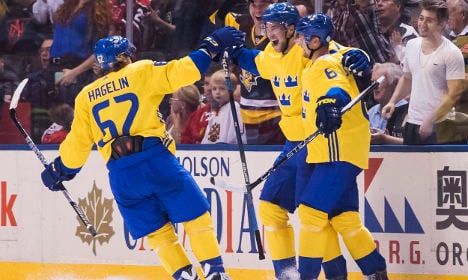 Ovechkin thought he had the game-tying goal with 8.2 seconds to play in the third period, but game officials ruled it no goal because he batted the puck into the net with his hand.

Video review confirmed the call on the ice.

For Russia, it was a disappointing opening to the two-week, eight-team tournament featuring a wealth of top National Hockey League players.

Washington Capitals captain Ovechkin, still seeking his first Stanley Cup NHL crown at age 31, has had a conspicuous lack of success in a Russian jersey in such “best-on-best” events.

He has won three gold medals with Russia at the World Championships, but the event overlaps with the NHL playoffs and does not feature all of the elite league's top players.

NHL players began competing in the Olympics in 1998 and Russia have never captured gold, taking silver in 1998 and bronze in 2002. The Russians were bounced from their home Winter Games at Sochi in 2014 in the quarter-finals.

With the NHL's commitment to making all top players available for future Olympics wavering, the rebooted World Cup may be Ovechkin's best chance to prove he can lead Russia to a title in a tournament featuring the world's best.

Ovechkin had scored on a wrist shot through traffic with 33 seconds remaining in the third period to trim the deficit to 2-1.

Landeskog netted a power-play goal at 10:41, four seconds into the man-advantage.

Hedman scored off of a feed from left wing Carl Hagelin at 12:52.

In the day's other game, Team North America — made up of under-23 players from the United States and Canada — defeated Finland 4-1.

Goalie Matt Murray's shutout was lost when Valtteri Filppula scored for Finland at 15:53 of the third period.